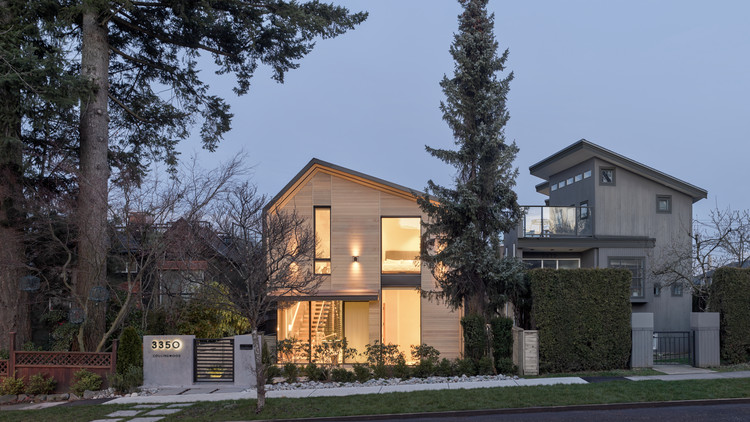 Text description provided by the architects. The Collingwood House is a unique local collaboration between established practice and an emerging studio to create a living accommodation that is responsive and personal. It is a successful example of small-scale residential architecture that utilizes its immediate context and the local climate to generate a sensitive contemporary house. Upon winning the Beebreeders’ Microhome competition in 2019, Bla Design Group received its first commissioned project, the Collingwood House. They invited Campos Studio to collaborate, to bring their approach to architecture in which each project is led by the specific conditions of the local context.

With a site located in a traditional residential neighbourhood comprised of diverse architectural styles, the design of the Collingwood House became a sensitive contemporary response rooted in the local context, climate, and culture. The project draws from the Craftsman housing stock that formed the original settling of Vancouver. From this, ideas of the porch, cover, and textural facade became part of the design.

From the West Coast Modern tradition, careful attention was paid to the transitions between interior space and garden. The resulting dwelling tied together these typologies found in the surrounding neighbourhood. Transparency, texture and light drove the interior and exterior of the house. The quality of light in Vancouver changes drastically with the seasons. A blackened gable roof wraps the dwelling, defining its form amongst the winter’s dull grey skies, with windows letting in light from above.

As the seasons change and the trees begin to blossom, the form remains defined but the textured cedar facade begins to blend into the natural environment. This colour palette allows the contemporary dwelling to maintain a sophisticated, yet humble appearance year-round. The interior of the house is light, airy, and soft contrasted by warm wood and black detailing throughout. This palette allows for a calm and relaxing atmosphere, especially during the grey winter season. Large corner windows are positioned beside a floating staircase, allowing natural light to flood the entire length of the living spaces. 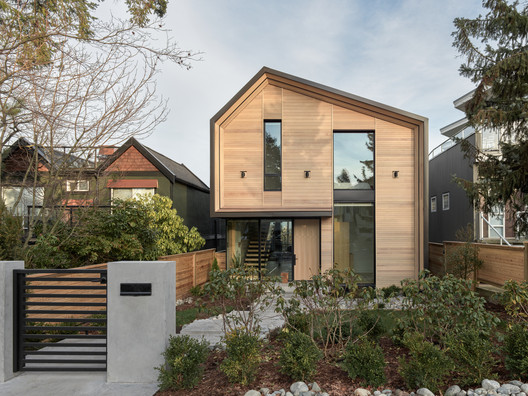 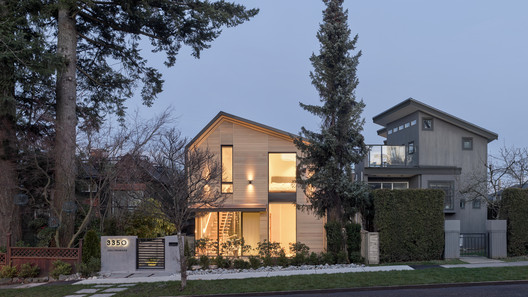