Save
Beirut: Between a Threatened Architectural Heritage and a Traumatized Collective Memory
Share
Or
Copy 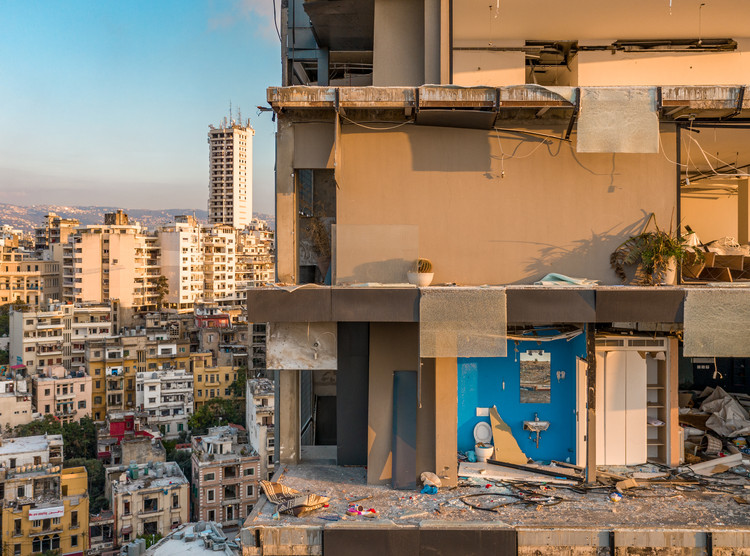 Cities, the object of dispute and power, are a mere representation of the social and political stakes. Depending greatly on its geographical location, Beirut, the port city that knew growth starting the 19th century, became a gateway between east and west and previously generated a major transit hub rendering the structure of the capital into a node of connections. A reflection of its inhabitants, today the city is shaken, shattered, and stripped from its artifacts and senses. Read on to discover Beirut post Blast, the aftermath, and the road to recovery with a series of exclusive photographs by Rami Rizk.

The “hybrid” urban fabric of the city was a composition of houses dating back to the late Ottoman period, French mandate, with modern adaptations, imported occidental additions, and contemporary constructions. According to the latest reports, 730 historical buildings, built between 1860 and 1930 were damaged, of which 331 are in complete devastation. In fact, the Sursock palace, one of the architectural gems of the city, built in 1860 by Moussa Sursock, is totally ravaged, while the Sursock museum, that took 20 years to be fully restored after the civil war, also got its share of destruction. Other endangered buildings include the famous Electricité du Liban headquarters and the Ward house. Moreover, almost 3000 buildings, not classified or labeled as cultural heritage but considered fundamental elements of the urban fabric and valuable for the surrounding built environment, are at risk of falling.

Damages were reported 20 km away from the epicenter. New contemporary structures completed not many years ago, by local international architects such as Bernard Khoury, Lina Ghtomeh, and Nabil Gholam, lost their cladding, and all their glass, wood, metal, and aluminum elements along with some minor cracks in the walls. Right next to the blast, the country’s wheat silos, a 50-meter high structure made from reinforced concrete, prevented further destructions to the city and shielded the southern side. Still standing, the structural wonder, inaugurated in 1971, absorbed part of the shock waves according to experts. According to the World Bank, the Beirut explosion caused up to US$4.6 billion in damages to the infrastructure and physical assets.

It is said that we get the city we deserve, this is why it’s important to always take a stand and fight for the future we aspire to have and for change. In the complete absence of proper governmental institutions and with so much at stake, it’s essential to question who will oversee the reconstruction schemes. Nevertheless, subconsciously or better yet by force of habit, the community has mobilized all its efforts at once and took matters into its own hands. Personal initiatives, NGOs, and organizations, or in other words the civil society is the driving force behind the inception of a new type of governance and the start of a planned and still timid reconstruction movement. Can the people build their cities on their own? While this remains to be seen, everything in the world is moving towards more people-centered and participatory approaches.

Lessons from the Past

A large part of the creative and academic community considers that the post-civil war reconstruction of the city center carried out in the 90s by real estate tycoons, has completely eradicated the previously existing urban and social fabric of the center. The expropriation and privatization created an empty and isolated center. In fact, in Lebanese history, this was not the first time, this kind of approach was used. With the arrival of the French mandate in the 20s, the first reconstruction efforts were very similar in concept to the post-war reconstruction. Expropriation was also established to build infrastructure and the semi-destroyed center at the time. In order to eliminate the repetition of this scenario, in a race against time, activists are currently fighting for a new approach to saving the houses they were born and raised in, built their lives in, and inherited from their ancestors, ensuring the continuation of the neighborhood.

Speaking of rebuilding, on a technical level, all heritage buildings can be restored, nevertheless the question that remains unanswered is related to the fiscal aspect behind these costly restoration works. Some are fearing a demographic change and displacement of the community, or worse an acquisition of property from developers, taking advantage of residents’ distress and vulnerability, but volunteers are on the ground trying to safeguard some at-risk buildings, using temporary supports, fighting daily to keep people safe in their homes.

Nevertheless, reconstruction efforts will require not only the rehabilitation of classified buildings but also of entire urban fabrics. Therefore, special rules should be drawn to ensure the transfer of development rights to other zones, to compensate owners and prevent the destruction of heritage. In other words, since the law allows a much bigger built-up area in these plots nowadays, instead of replacing these older structures with towers, owners could sell their development rights to be absorbed by other areas in need of densification.

On the other hand, UNESCO has recently launched the Beirut recovery fund for culture, heritage, and education, in order to protect the historic center and prevent property speculation. It is reported that $500,000,000 are needed over the coming year to support heritage and the creative economy.

Getting tired from romanticizing the notion of resilience, the question tormenting the Lebanese revolves around an unknown and unimaginable future. How much can a population endure, before reaching its breaking point? The destruction of the capital is not limited to physical losses, but the two explosions struck to the core, shaking the Beirut ideology, and shattering everything the city stood for. A beacon of hope, the city has always been the personification of optimism and inspiration for all its inhabitants and for all the Lebanese diaspora, longing to return. However, Beirut today is not the Beirut of yesterday, and the collective memory of its people is in serious peril. 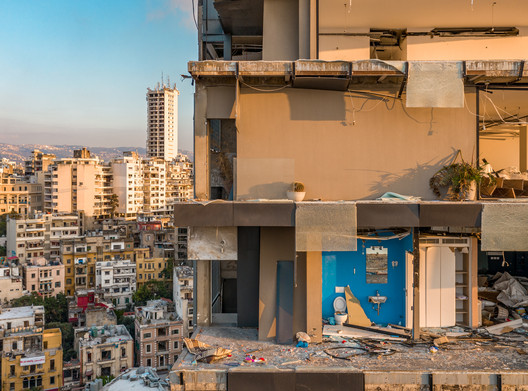