Save
The Political Dimension of Architecture: Activism Through Design
Share
Or
Copy

The inertia of politics and governance in a time when major societal changes occur at an increasingly faster pace and the dissatisfaction with the decision process makes room for bottom-up actions, activism and bold endeavours. In the light of so many examples of social activism, do architects have the tools to make their own stand? Does architecture have the power to disrupt the status quo?

A year and a half ago, Greta Thunberg was addressing the World Economic Forum at Davos urging the world leaders to take action against climate change. Her campaigning gained international attention, and thousands of people rallied behind her, putting pressure on the decision-makers to act on the climate change crisis. The action hasn’t managed to influence climate politics to the extent it was hoped for, however, what matters is that her actions put climate change on the headline, sparked debate and inspired a great number of people to be more conscious of the environment. Could architects use their distinct set of skills to push for change in a similar fashion?

All architecture has a political dimension, in the sense that it expresses a set of values. The architectural object performs politically, through the situations and activities it encourages and the ones it prohibits. Architecture has the great potential of taking on complex matters and starting a debate, it proposes scenarios, expressing solutions to pressing issues. Given the important role of the profession in shaping the built environment and urban life, some architects double their efforts and not only advocate for change, but actively get involved in jumpstarting the social progress through activism.

The Architecture of Social Interaction

It is not often that architects get involved in political debate, or publicly advocate for a particular political option. Nonetheless, Rem Koolhaas is not shy of boldly expressing his opinion. On the week of the 2019 European elections, together with architect Stephan Petermann, he released a short film explaining the real cost of EU for its citizens, while outlining the incomparable benefits. The video equals the EU membership cost per citizen to that of a Netflix subscription and goes on to list the many different projects EU is financing. The film’s objective was that of increasing the voter turnout, and Koolhaas motivated his action by outlining the lack of concise and understandable information presented in a manner that would appeal to a broad audience. Koolhaas’ backing of the EU goes further, having previously designed a proposal for the EU flag, in the form of a barcode containing all the member states flags combined.

The Right to Shelter

The primordial function of architecture is to provide shelter. Not a de-facto, universal human right, the provision of shelter is nonetheless embedded into the framework of democratic speech; hence it becomes a political right. Architects have for long been involved in creating suitable responses to emergency housing, or participatory architecture. Some of those actions are gestures of critique, guerilla projects. At the border of legality, Paris-based Stéphane Malka’s A-KAMP47 project represents a strong commentary on the incapacity of architects and local administration of dealing with the homelessness issue. The project consists of a wall of vinyl tents erected in an industrial corridor in Marseille, France. These are cantilevered off a minimal still lattice, and itself fixed to a long concrete wall that fences in a railyard. In his description of the project, the architect stresses the need to turn our efforts, as a society, towards empowering the underprivileged. What makes the project stand out among designs serving the same purpose is precisely the boldness of the architect to move beyond proposal and prototyping, and act on his idea in the public realm, thus raising awareness and stirring conversation.

Public space is the main playing field for politics and power; thus, it is the main focus of activism in architecture, with actions usually described as tactical urbanism. Park(ing) Day is now a global event consisting of temporarily turning parking spaces into mini-parks, which started as a solitary experiment by a group of urban designers called Rebar. Their first urban intervention in San Fransicso consisted of simply renting a parking-space and furnishing it with living grass, a potted tree and a bench. The project gained so much attention that they made their idea open-source and more and more Par(king) installations popped-up. Rebar’s intervention in San Fransico helped create permanent change, as several cities have since deployed permanent Park(ing) style installations, commonly known as parklets. It goes to show that small initiatives can impact urban politics and inspire an alternative path at the decision-making level.

The Park(ing) Day event gained such momentum because, in cities around the world, people are struggling to reclaim public space and put an end to the hegemony of the car. On the same lines, Fine Young Urbanists designed the installation Miergi!. A section of a street in the city of Riga is painted blue and transformed into an outdoor terrace for a local coffee shop, doubled by a bike lane, creating a space conducive to vibrant urban life. With the current health crisis, architectural interventions in the public space have taken centre stage, and this time authorities did not resist the appropriation but embraced the ideas. As an example, SHoP Architects have designed a kit-of-parts for “parklets” that businesses can deploy in the street for outdoor retail and dining during the pandemic.

The prospect for change grows as these local episodes, small-scale, temporary interventions are being aggregated and broadcasted via social media and design blogs, gaining global outreach. They all prove that architecture could be a political weapon since the built object stands proof of the values of society at large, it talks about who we are as a collective and also about who we strive to be and the world we wish for. This is why architects have a huge responsibility for influencing the current narrative towards better scenarios since the profession has the tools to spark debate, critique the status quo, envision and present the public with alternatives. 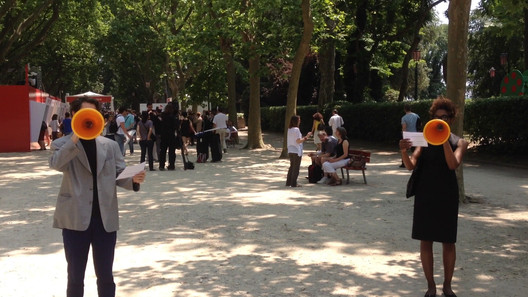