Over the past two centuries, cities in China have multiplied and expanded on a large scale, under accelerated urbanization. Mass demolition of the old city fabric, occurring everywhere, is leaving industrial debris and fragmented cultural artifacts buried forever, under shiny new skyscrapers. As old Chinese cities are collapsing and new urban centers are outspreading, a part of the city was lost, the old demolished landscape. Wang Shu and Lu Wenyu, the first Chinese citizens to win the Pritzker Architecture Prize, responded to this past-present relation by working with recycled materials and traditional know-how. In the following, we explore some of this couple's renowned works such as Ningbo History Museum, Ningbo (2008), Xiangshan Campus of China Academy of Art, Hangzhou (2004), and Ningbo Contemporary Art Museum (2005), to examine his humanistic approach to the city.

“The question of the proper relation of the present to the past is particularly timely, for the recent process of urbanization in China invites debate as to whether architecture should be anchored in tradition or should look only towards the future”, stated the jury in their citation for the Pritzker Architecture Prize. Certainly, rapid urbanization has contributed to the economic growth in China, through considerable revenue generated from high-rises spread in the cities. Nevertheless, when old villages are being demolished, the collective memory of the residents, the tradition and culture that have been passed down through generations, are falling into ruins as well. In fact, it has become the social responsibility of architects to preserve memories on a reconstructed landscape.

In 1997, Wang Shu and his wife Lu Wenyu founded the firm Amateur Architecture Studio in the hope of challenging the "professional and souless architecture" practiced in China. In heir monumental project, Ningbo History Museum, completed in 2008, they responded to the above challenge with an organic approach that attempted to blend the architectural elements with the landscape. According to Wang Shu and Lu Wenyu, their concept was inspired by the process of making a traditional Chinese painting, in which they would study the settings first, whether it was cities, valleys, or mountains. Then, as they researched further, the design would eventually materialize in their mind through an extensive understanding of the site.

A Guide to Design for Disassembly

In Ningbo History Museum, for example, Amateur Architecture Studio designed the façade of the building as if it was the surface of a mountain comprised of massive reinforced concrete walls, partly clad in recycled terracotta and clay tiles. By recycling materials from the demolished buildings that once constituted the existing site, Wang and Lu were trying to recall a past that was almost forgotten. In Wang and Lu's design, the past has been turned into the permanent inner lining of the formwork, providing a randomly decorative coating.

"The surroundings, to some extent, are more important than the architecture alone," Wang and Lu argue. "So, architecture should fall under the landscape, not the other way around." Ningbo History Museum, built from the rubble collected from the previously existing landscape, has become a vast concrete fortress, a cultural foundation that stands against the largely dispersed erratic fabric of the new city. By this means, the new building has successfully blended with the landscape, both made from the same material and immaterial elements.

In Amateur Architecture Studio's  “poetics of recycling”, Wang and Lu claim that, “Building should not only grow with the site, but also grow with time”. Unlike those flashy skyscrapers made of highly reflective curtain glass and pale steel concrete, Amateur Architecture Studio’s works focus more on the utilization of traditional building techniques, and on an excessive collaboration with traditional artisans. By reaching out to local craftsmanship, Wang and Lu bring back traditional materials. They also send some of these elements to the people who originally created them, asking for a fresh revamping.

Moreover, in Amateur Architecture Studio’s 2004 project, Xiangshan Campus of China Academy of Art in Hangzhou, a local method that is traditionally used in the local tea field construction was adopted for the stone bases. Through this technique, Wang and Lu attempted to symbolically represent the anchoring of the school in its surroundings. In addition, they designed a wall comprised of a collection of recycled old bricks and roof tiles with 20 different dimensions, as well as handrails made of painted steel frame with an in-fill of bamboo strips.

“We want to create architecture that is better suited for ordinary people. To design for human scale and use. And use more natural materials. Build with natural materials so it looks as if the building grew out from the land, not that you suddenly put a building there. Then as time passes by, the building looks even more beautiful than when it was first built”, said Wang Shu and Lu Wenyu at a CNN interview. The use of natural materials, taken directly from the surrounding environment and re-processed by local artisans, has also integrated the buildings in time. They look as if they've emerged from their context organically.

It is worth noting that when buildings grow with the site, they are no longer a group of geometric objects, instead they become part of the landscape. For example, Amateur Architecture Studio built a guesthouse with the purpose of augmenting the existing Xiangshan Campus. Emphasizing a walkway across the rooftops, bamboo-clad facades, rammed-earth walls, and cave-like openings in the concrete construction, the structure displays a combination of shapes, techniques, materials, and textures.

This Guesthouse illustrates Amateur Architecture Studio’s intention to “draw” the building into the site, instead of “model” them onto the plot. Wang and Lu designed this Guesthouse as a “vertical landscape”, linking it to traditional Chinese landscape paintings, known for their composition of multiple scenes or spatial sequences painted vertically one above another. When several natural materials are employed on different layers of the building, allowing various activities and movements to happen across space, the building truly becomes a poetic expression of an atmosphere that blends the present with the past.

Nevertheless, in China, architects like Wang Shu and Lu Wenyu, still require adequate support from regional politicians and local governments. At the end of the day, buildings are a collaboration between architects, craftsmen, and policy-makers.

Regarding the Ningbo Contemporary Art Museum, located in the Ningbo Port area, Wang and Lu affirm that the project is “a typical example of good cooperation with regional politicians”. Because of the active support received from the local government, Wang and Lu’s idea about regionalism was able to come together. Although most parts of the historic port buildings had to be demolished due to security reasons, Wang and Lu tried to rebuild a “Chinese ceremonial space” by dividing the building perpendicularly into upper and lower areas, with the upper part for art exhibitions and the lower part for commercial exhibitions. Wang and Lu recycled the gray bricks from the destroyed building to lay the foundation of the main building.

To conclude, through the use of recycled materials in modern Chinese architecture, one must rethink the relationship with the surrounding environment, tradition and past. As we are all part of history, producing an architecture that is timeless and deeply rooted in its context while staying universal should be everyone’s responsibility. 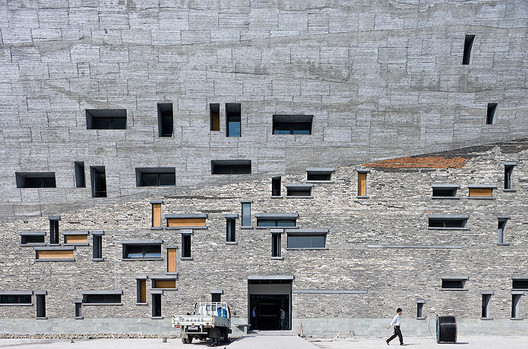