Save
San Francisco: Modern Housing in The Golden City
Share
Or
Copy

San Francisco is a city defined by its relationship to housing. Since the 90s it has faced an affordable housing shortage, and now, has some of the highest rents of any major US city. As planners and policy makers work to move beyond the city's past and find new paths forward, architects and designers are testing out diverse housing models. From dense residential towers to multi-unit developments, modern housing aims to strike a balance between economy and urbanity. 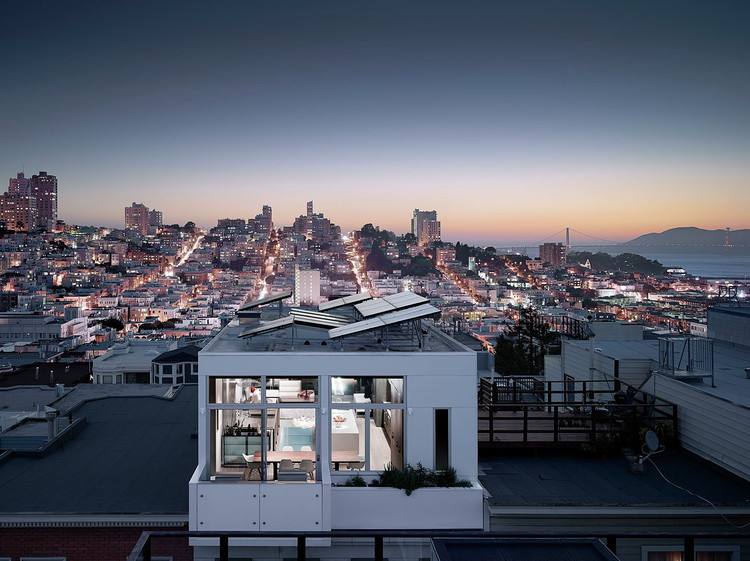 Blending a range of styles throughout its seven hills, San Francisco is home to an eclectic mix of housing. Between historic Victorian residences and expansive single family homes, Bay area residents have seen a wave of more dense housing projects that aspire to make use of the city's limited space. From modular construction to cross-laminated timber and integrated transit developments, San Francisco is desperately trying to rethink its housing stock. Reflecting this wave of architecture built over the last decade, the following projects explore different programs and housing types across the city.

With a novel approach to a difficult site, this mixed-use, multi-family project aimed to capture the craft culture and quirky contrasts of San Francisco’s Dogpatch neighborhood. What was previously a collection of blank warehouses on Indiana Street is now complementary residential buildings designed by separate architects.

The Noe Valley House is a new four level residence on a steep street in San Francisco’s Noe Valley neighborhood. It is designed to respond to opportunities presented by its site and situation, and it responds to the morphology of neighboring infill urban fabric and the possibilities of a walkout rear yard and distant views in the downhill direction to the east and north.

This mixed-use development of urban market-rate homes, restaurants and shops continues the repair of the neighborhood fabric damaged by the removal of the Central Freeway. The design was developed as a balance of inside and out: equally addressing the needs of residents and the community.

400 Grove introduces 34 residences in the heart of Hayes Valley to connect to the walk-able neighborhood. Its prominent site at the corner of Grove and Gough streets is one of several created by the removal of the Central Freeway in 2003 as part of an initiative to reconnect Hayes Valley with surrounding neighborhoods.

Originally a laundry boiler room, the brick house is now a full service guest apartment. The ground floor is 8'-2" x 11'-6"; approximately 93sf. It hosts a full kitchen, living room with couch and dining table, and fold out cushions for a lounge chair on the stair landing.

This new senior community center and on-site supportive senior homes are the realization of a long-time dream of activists and advocates working to create a gracious space for local elders to age in place in health, dignity, and company. The center is the heart of a developing Aging Campus in the Bayview neighborhood.

On an atypically-configured sloping double lot in San Francisco, this new home takes advantage of rare siting to maximize the experience of changing daylight and sweeping city views. The use of deep overhangs and angular cedar forms carefully frames horizon views while gently responding to the corner sitting.

8 Octavia's site is where the elevated 101 Freeway connects to the surface streets at Market and becomes Octavia Boulevard – the entrance to north/west sector of San Francisco. The long thin mass of building floats above the street to make public commercial space at both ends.

This remodel transformed the street façade with grey limestone cladding and projecting metal frames around the windows and garage. It also opened up the entire top level as one great room with windows on three sides, where new skylights softly illuminate the lower levels entry, drawing visitors up from the entry to the main living area.