Save
Putucos: What A Indigenous Technique Can Tell Us About Sustainability
Share
Or
Copy

As a part of the XV Taller Social Latinoamericano architectural conference that took place in Puno, Peru, we visited the Iruito Tupi zone in Huancané province alongside Francisco Mariscal, Director of the Puno Cultural Center. For the conference, Mariscal gave a presentation on the history of putucos, pre-Columbian houses made with a mixture of earth and grass.

History has the habit of repeating itself; using the same script, just with different names, figures, and places. Some 10,000 years ago, the Altiplano and the Titicaca lake basin, wedged between modern day Peru and Bolivia, became home to hunters and gatherers who subsisted on the herds of llamas and vicuñas as well as the bounty of birds and fish. 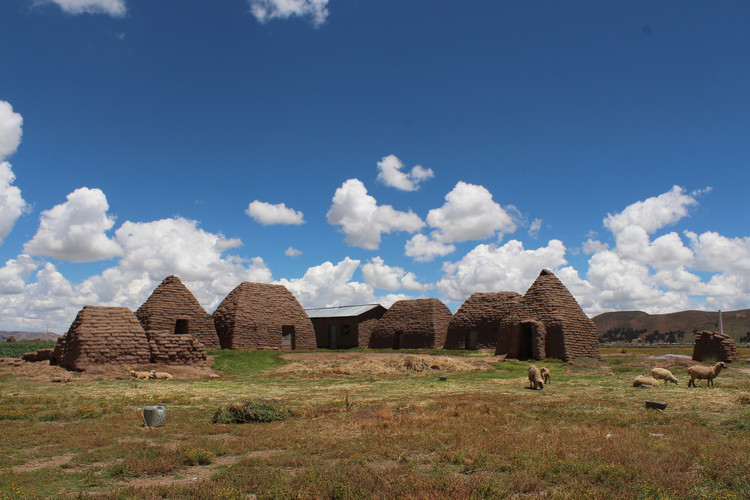 From these hunter-gathers came the Uru, a group of people whose name originates from a derogatory term used by the rival Quechua and Aymara people, who considered the Uru hunter-gatherer lifestyle outdated and uncivilized. However, from this seemingly rudimentary way of life, the Uru developed building techniques that have endured to today. The first is the use of reeds to construct rafts, boats, and even floating islands. The second is their use of earth and grass to create their most distinguished work of architecture: the putuco.

Consisting of a square base topped by a conical roof, a putuco is built using a mixture of earth and grasses, called champa, which is extracted using a chakitaclla, a type of hoe, as illustrated by researcher Ferruccio Marussi in his work The Putucos of Puno.

Once we venture outside of the bustling city of Juliaca, the Collao plateau opens up before us, seemingly boundless except for the horizon and sky above. Here, the sky bursts with vibrant, living colors while the land is painted with the yellows and greens of crops nestled in their terraced fields. This time marks the brief interlude between March and May when the land isn't at the mercy of the droughts, frost, and floods that do their work all other months of the year. Amidst it all, the putuco stands as a dignified example of humans working with nature.

Putucos are categorized based on their purpose, serving as everything from sleeping areas and kitchens to storehouses for grains, tools, and even livestock.

"They truly are living structures", explains Francisco Mariscal as he approaches a putuco. The roots of the grasses that form the structure interlace with one another, forming a living mortar." And thanks to the particular mixture of earth and grass, a putuco's thermal properties match even the most modern of buildings, conserving heat in the colder months while offering a cool escape from the heat on hotter days.

In spite of their simplicity, putucos are completely adapted to their surroundings. They don't pollute or contaminate their environment and are built from the land itself. "When the rains arrive and the floodwaters surge, we simply leave the putucos and wait out the floods," explains Alejo Paricanaza, whose family has several patucos of their own. "The floods don't destroy them. They withstand anything the land throws at them."

The blocks of champa need to be dried for 15 days before the putuco can be built in July or August. Trying to build it sooner would result in wet blocks that would be difficult to assemble. Even more important, the champa should be made from virgin soil, meaning that it can't have been used for crops. This forces the builder to go further away to find adequate earth, so newer putucos are typically smaller than their predecessors.

On the other hand, the arrival of new building technology, changes in climate conditions, and growing opportunities for work and schooling in nearby cities has led to the younger generations leaving behind the traditional lifestyles of their forbears. "The young people don't want to live in putucos as their grandparents did. For them, it's an embarassment," explains Mariscal. "Because of this, knowledge of this technology and lifestyle is rapidly disappearing."

In an attempt to save this tradition, Peru's Ministry of Culture declared putucos a part of the national cultural heritage in 2014 and even commissioned a documentary capturing the process of constructing a putuco featuring specialized builders. According to Mariscal, these and other initiatives will allow for these traditions to be passed down to the younger generations of the region, potentially making them a part of the conversation on how best to build for the future by using sustainable architecture.

Special thanks to Francisco Mariscal and the Peruvian Ministry of Culture.