Aquariums are built to reshape expectation. Giving visitors a new vantage point to observe freshwater and marine life, these structures range in scale from simple exhibits to elaborate public aquaria. With a diversity of programming, they often include facilities for rehabilitation and conservation, as well as educational spaces to support learning and discovery. Today, modern aquariums offer glimpses into aquatic life both above water and below the surface. 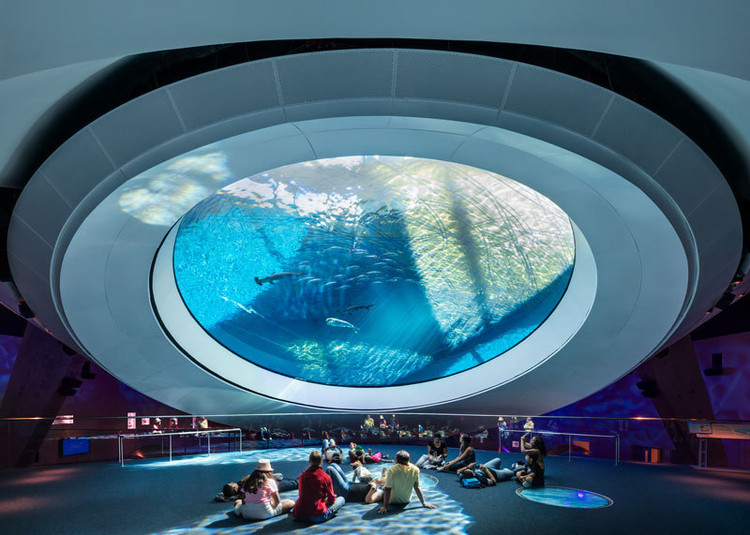 The idea of an aquarist dates back millennia, and was developed over time to incorporate a balance between animals, oxygen and plant life. Contemporary aquariums are built with intentional organizational strategies that control views and circulation through various exhibits. With careful attention to lighting and maintenance, they are made as both private and commercial developments that balance filtration and conditioning systems. Celebrating a blue world, the following aquariums use architecture to frame experience and foster new ways to learn.

Inspired by the shape of water in endless motion, Denmark’s new National Aquarium, The Blue Planet is shaped as a great whirlpool, and the building itself tells the story of what awaits inside. The whirlpool concept originates in a narrative about water, and as an image, is at once both abstract and figurative. It stirs attention with its distinctive vortex blades, but at the same time, as a building, changes dramatically depending on viewing angle, distance and daylight conditions.

Designed by the Richter Dahl Rocha & Associés firm of architects, the Aquatis Complex is part of the Biopôle, a science park centred on life sciences, developing fast in the northern area of Lausanne. The 1200-place car park forms the structural basis of the project. Its unusual shape follows the built-up area of the site. It also follows the contours of the terrain, and has wide open views to the southern side on all three levels.

The Karlovac freshwater aquarium is located by the river Korana. The building volume is partially dug into the ground and covered with earthen embankments and greenery from its outer edges. The design concept was inspired by the city’s historic center “Karlovac star” surrounded by “Šanci” – defensive earthen walls and mounds. The goal was to form a new city focal point and to validate the promenade by the river.

The main design decisions of Antalya Aquarium project are determined with desire of vanishing in silhouette and creating harmony with topography. Pulling back of the ground floor, a shaded public area is created to beware from sun and profit from wind. This shaded public area is the point of approach, gather and diffusion of the aquarium project. Also the shell of this area determines the information and food areas, amphitheater and box office with its curves and waves.

The River Aquarium is located in Mora, a small municipality in the Northern Alentejo region. Given the need to shift regional development from the dependence of an increasingly weaker agriculture economy into the environmental tourism and leisure market, the municipality launched a design-and-build competition for an aquarium that could somehow embody the paradigms of biodiversity of the Iberian river.

The 250,000 square foot Phillip and Patricia Frost Museum of Science (Frost Science) in Miami, Florida brings together an aquarium, planetarium and science museum onto one campus in downtown Miami’s Museum Park. The project was made to take advantage of the city’s plentiful sunshine, ocean breezes from nearby Biscayne Bay and views to a growing downtown skyline. 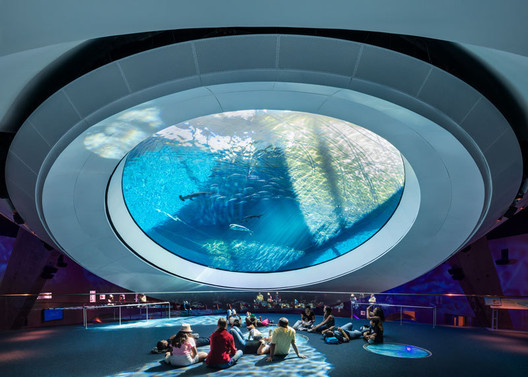