Save
4 Technologies Impacting Furniture Design and Manufacturing
Share
Or
Copy

Dissociating architecture from furniture is almost impossible. As Le Corbusier parking contemporary cars in his project photos suggests, the objects that decorate a domestic space demonstrate the wealth and lifestyle of the user who lives in it. From the moment that humanity ceased to be nomadic, there has existed records of rudimentary furniture. In an excavated site dating from 3,100 to 2,500 BCE, a variety of stone furniture was discovered, from cabinets and beds to stone shelves and seats. Since these early examples, furniture has always been used to express ideas: be it the exclusive and luxurious furniture of Ancient Egypt, meant to demonstrate the power and wealth of the empire, to the functional and simplified designs of the Bauhaus, meant to reconstruct rationality in the world, studying the evolution of furniture design is instrumental to understanding architectural styles.

Nowadays, the advancement of technology and the internet has made changes develop faster and faster, making them even more difficult to assimilate and follow. Furniture follows this trend, be it in the way of designing, manufacturing, or even selling products. Below, we outline some ways in which technology has impacted this field:

3D printing is already much more widespread than we think. These machines, selling at increasingly affordable prices, generally work by depositing and gluing layer by layer tiny grains of some material such as plastic, ceramics, glass, metal, and even concrete. It belongs to a type of manufacturing called additive manufacturing, in which three-dimensional geometries produced on a computer (a CAD drawing or a three-dimensional model) are transposed into reality utilizing only the exact amount of material needed and creating shapes that would be unimaginable for a human being to manufacture.

Its use extends from industrial design to replicas of archaeological objects, and promising research is underway for the manufacture of artificial human organs and tissues, limb prostheses, and more. When talking about furniture, the options are also profuse, from printing connectors and junctions for shelves or benches to making complete furniture.

Nóize chair, by Guto Requena, is an interesting example of the 3D printing process applied to furniture. Based on an icon of Brazilian design, the Girafa chair by Lina Bo Bardi, Marcelo Ferraz, and Marcelo Suzuki, the Nóize chair's three-dimensional model was created by fusing the Girafa model with an audio file of urban noises and sounds collected on Santa Ifigênia Street in downtown in São Paulo. This digital file was then sent to a 3D printing machine in Belgium. As is demonstrated by this example, a furniture object can be printed anywhere in the world simply through possession of a digital file, which can be a useful option for remote locations.

The idea behind BITS & PARTS chairs is that they can be downloaded for free and printed at home. Each component is small enough that it can be made in even the most compact 3D printers, and come together like a puzzle to form a chair. The aim of the product is to democratize and render accessible the manufacture of furniture.

Among several other 3D printing initiatives, one that draws attention is Zero Waste Lab, a research project in which Greek citizens can transform plastic waste into urban furniture. This waste, highly polluting and practically indestructible, is processed to become raw material for this new furniture, with the aim of redesigning public spaces in the city of Thessaloniki, Greece.

3D printing at an industrial scale still doesn't seem feasible, which could change very soon. But it could prove highly useful for furnishing remote places and even other planets, as we see in NASA simulations to build bases on Mars. Currently, for the creation of prototypes, the manufacture of exclusive furniture, and the printing of parameterized and organic forms, 3D printing is already a reality.

Whether it's filters on Instagram or interactive games, Augmented Reality has also ceased to be a promise of the future and instead entered our daily lives. Especially through the cell phone, which we carry all the time, and its camera and sensors, the technology allows us to superimpose virtual objects onto real environments. In the case of furniture, augmented reality applications serve, above all, to locate desired objects in a real space, giving a better sense of scale, color, and how the environment will look in the future.

That is why several companies have been investing in tools to improve the visualization of their products, making these conditions even better. Morpholio, for example, allows users to insert some of the most iconic pieces of furniture into their own home through a few clicks. The giant IKEA also developed an application to test its furniture in real environments.

In addition to visualization, augmented reality tools also exist to assist users. The designer Adam Pickard has been developing an application to assist in the assembly of the brand's furniture through augmented reality, which could save users at least a few tears and a few drops of sweat.

The Internet of Things (IOT) refers to the digital interconnection of everyday objects with the internet and among themselves. Appliances, vehicles, public equipment, and other objects equipped with sensors and connection to the network collect and transmit data. This makes it possible, first, for these objects to be controlled remotely via cell phones or computers, and, second, for the objects themselves to be used as Internet Access Providers. Now, we might ask ourselves: what do I want furniture with internet for? Yet without a doubt, at some point we will ask: how did we live without it?

In addition to its basic function (which it will continue to perform), furniture with internet can provide us with comfort, reduce repetitive tasks, remind of commitments, and even protect health. If your phone connects to the air conditioner, by the time you come home, your house may already be at the desired temperature. You can control the lights even if you are traveling, irrigate your plants with the exact amount of water and soil acidity needed, and so on. Refrigerators, when noticing the lack of an essential food, can place an order automatically, only leaving the user to approve the order and receive the delivery person. This functionality can be particularly useful to elderly people living alone or to people with physical disabilities.

But the Internet of Things can go even further. There exists some research into toilets connected to the internet, whose sensors and artificial intelligence can detect early signs of disease and help people manage chronic conditions like diabetes. The possibilities are endless and the Internet of Things can impact every scale of life from the daily functions of a  room to the distribution of infrastructures of entire states. With this new technology, care can be taken to ensure extra safety and resource savings.

When we open Netflix, lying on the couch, the artificial intelligence of the app is already working to recommend us movies and series that may interest us. Or when we want to know the fastest way to an address, a maps application uses several operations to give us an adequate answer, which may even change during the route. The term Artificial Intelligence is often applied to the ability of a machine or system to reason, discover meaning, generalize, or learn from previous experiences.

In furniture design, AI is used in the concept of generative design, which we covered extensively in a previous article. The computer can develop thousands of iterations, following parameters and orders pre-established by the user, to arrive at the most appropriate solutions. Kartell's A.I. is considered the first market chair created through Artificial Intelligence. Developed by architect Philippe Starck, in partnership with Autodesk, generative design was used to arrive at the design of a strong, stable, and aesthetically pleasing chair, using as little material as possible. Stark commented that the process was "very similar to a conversation," in this case between the parameters applied in the program and those that were carefully evaluated.

While some may understand these rapid changes as a bleak scenario in which machines will take over, the function of the human being remains essential to define parameters, objectives, and give the right direction to technologies. Can a machine really understand all the needs and demands of a user? How can a computer understand concepts like ergonomics or the feel of wood fibers? Without a doubt, the future is a cooperation between computers and humans to make decisions more conscious, the use of resources smarter, and people's quality of life better. 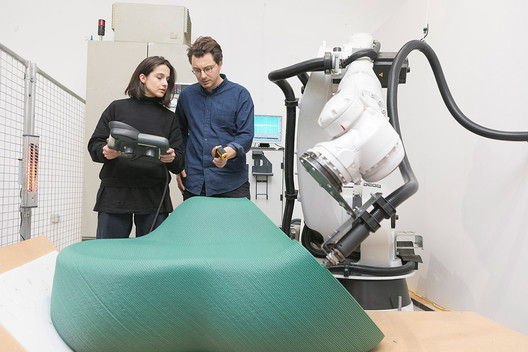