As a more significant part of the world population is being treated or living in vulnerable conditions due to disasters, designers can help reimagine how temporary or emergency structures can work. There are a variety of solutions to temporary structures adapted to the type of disaster (refugee migration, earthquakes, pandemics, etc.) that can best address the affected population. The following projects showcase how architects and designers have rethought emergency shelters to serve basic needs, as well as one example designed to treat patients of the latest pandemic.

Maidan Tent is Built for Emergency Aid in Greece

Lucas Boyd and Chad Greenlee from the Yale School of Architecture came up with proposal designs on churches, synagogues and mosques that can be quickly built as “Pop-Up Places of Worship” in refugee camps. By presenting immediately-recognizable sacred spaces that are transportable and affordable, Boyd and Greenlee highlight spaces for worship as a necessity in any type of human settlement.

Beyond the Tent: Why Refugee Camps Need Architects

As Katherine Allen stated back in 2013, some 1 million people poured out of Syria to escape a civil conflict that had been raging for over two years. As she notes, the average lifespan of a refugee camp ranges from seven to seventeen years (reports vary), and many last far longer. Allen argues why we need to reimagine emergency shelters, and specifically within the context of refugee camps.

New Pop-Up to Rebuild Nepalese Lives in "Just a Minute"

Following the most costly earthquake in their history, hundreds of thousands of Nepalese residents were rendered instantly homeless. To help these people reorganize and get back to a familiar way of life, Barberio Colella ARC designed a temporary structure using local materials “to make a house that can be built quickly, lightweight and compactly, durably and economically.”

SheltAir, a pavilion developed and designed by Gregory Quinn as part of his doctoral thesis at the Berlin University of the Arts is, as its name suggests, a shelter constructed with the help of air: a meticulously devised system comprising an elastic gridshell and pneumatic falsework in the form of air-filled cushions. SheltAir’s pneumatic system makes it quick, cost-effective, easily deployable, and ideal as a system for temporary events or even as refugee shelters in disaster-stricken areas.

Istanbul-based practice SO? designed and built a prototype floating structure for post-earthquake relief. “Fold&Float” is formed of a light, foldable steel structure specifically designed for emergency situations. Developed off the back of emergency assembly points being designated by the authorities in 2001, SO? questioned where people could be housed in the event of an earthquake.

Further Reading on ArchDaily about COVID-19 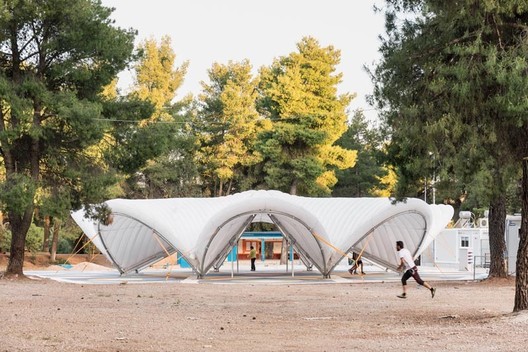