Albania's architecture is tied to the sea and the country's cultural heritage. Bordered by Montenegro, Kosovo, North Macedonia and Greece, the republic spans both the Adriatic and Ionian Sea as it connects to the Mediterranean. Over time, Albania has seen a confluence of different civilizations and cultures, each shaping the built environment as we experience it today. 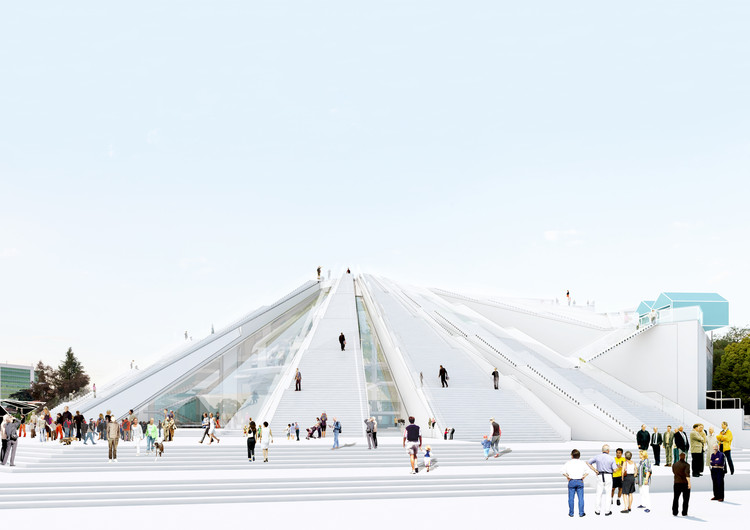 Albanians call their country Shqipëri or Shqipëria, meaning "Land of the Eagles" or "Children of the Eagles". In turn, the country's architecture is connected to its landscapes, from the mountainous Alps to the coastline, shaping diverse building styles and construction techniques. Inspiration was drawn from a range of backgrounds, including Ottoman, Venetian, Roman, Moor and Arabic influences. Throughout the country, historic buildings and contemporary structures stand side-by-side. The following projects take a closer look at Albania's contemporary architecture projects designed within the last ten years.

The restructuring of Skanderbeg Square is the result of an international architecture competition won by 51N4E in 2008. The competition’s proposal, conceived in collaboration with Albanian artist Anri Sala, reorganizes Tirana’s central square, a vast space, in a simple yet radical way. In a complex and dense urban context, on this site that is both the core of the Albanian capital city and a symbol for the whole country, the project installs a generous pedestrian area.

This renovation project for the Bank of Albania consists of both the total renovation and restoration of the existing historic Central Bank, designed by Vittorio Ballio Morpurgo in 1934-36, and the construction of a new building. It includes the new Numismatic Museum, a new conference hall for 150 persons, offices, meetings room, an internal gallery, a roof garden and an underground four-levels parking.

The selected design for the Marubi Museum developed by Casanova+Hernandez architects aims to promote a rich dialogue between tradition and modernity, between the past and the present. The legacy of the tradition is underlined by restoring the historical building designed by the famous Albanian painter, sculptor, photographer and architect born in Shkodër, Kolë Idromeno, while preserving its spatial and structural qualities without any volume transformation or new interior partitions.

The building for the Korça Icon Museum was originally a structure of columns and floor slabs (maison domino) abandoned when communism collapsed in Albania. The Albanian office DEA Studio sh.p.k. were comissioned to design facades and BOLLES+WILSON were then asked by the municipality of Korça to design and develop an interior exhibition design for the 300 orthodox icons.

The TID tower is part of a series of operations to bring the idea of the city as a collective space back in the hearts and minds of the people. The first wave was an emergency operation: in the year 2000 an ‘urban guerilla’ started, combining the destruction of buildings with the painting of facades in strong, larger than life colors. The second wave in 2003 was more organized and planning oriented: it crystallizes in a master plan for a pedestrianized center, marked at the edges with 2 parallel (and monumental) rows of towers.

BOOM Landscape worked in partnership with Cityförster on a commission by the mayor of Durrës to design a new public space on the site of a waterfront building-debris fly-tip. Explicit in the commission was the ambition to provide an inspiring transformation in the context of a national campaign to improve Albania’s sometimes mistreated coastline. Taking cues from the site itself, the team proposed adding more rubble, in the form of local stone quarried from the hills above Durrës.

Servete Maçi is a primary school located in the capital of Albania, Tirana. This newly built school is situated in a very dense area close to the center. The building is composed of 18 classrooms, 5 laboratories, one gymnasium, one full-size auditorium for 140 people, a library, 8 individual spaces dedicated to the learning of musical instruments, as well as several administrative areas.