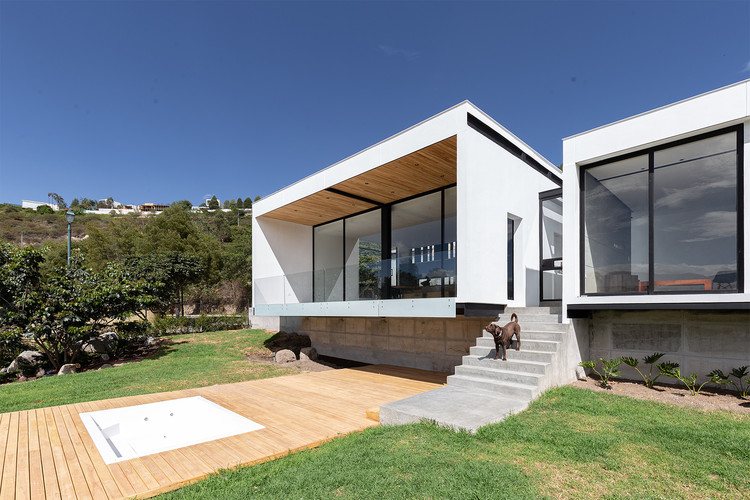 Text description provided by the architects. House for a family of three persons, located in a private urbanization in the Valley of Cumbaya in Quito, where two-floor single family homes predominate.

The plot is located on the edge of the slope and the valley, so it was sought to place the house at the highest level, to obtain the best possible views. The project is a perpendicular bar to the street, which feeds on the best orientation and allows a large garden whose perception expands with the street and at the same time gives green to the public space.

The house was placed following the axes of the neighbors, both in plan and in section, seeking to join the empty spaces between houses.

The project starts from two retaining walls, where two boxes are settled perpendicularly containing, the public and the private zones. In the empty space, between the boxes, the distributor hall is located, which crosses the house, allowing a direct access to the garden.

Almost the entire program is solved the first floor; only the garage, laundry, service bathroom and cellars, area located in the basement that appears between the two concrete walls. All the living spaces area located towards the view of the Valley, the mountains, the main garden, and is oriented towards the sun of the morning. The service spaces are organized towards the slope, related to a more content and controlled garden.

The implantation of the architectonic object, divides the garden into two parts, a public one, with a contemplative garden that accompanies the access, and a recreational back garden, with a teak wood platform with a whirlpool. The planning respected all the trees of the plot, highlighting a large Carob tree at the end of the circulation axis, and covers the main room with its shadow.

The foundation is made of reinforced concrete, where a lightweight system of metal is supported, allowing to obtain large lights and open spaces. The window frames are made of black aluminum, controlling the different relationships that each room needs with the outside.

It is a very correct and orderly house, nourished by the conditions of the environment, to enhance what was built as part of a clean and cost-efficient project. 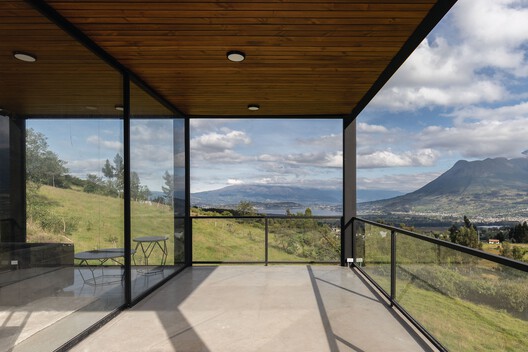