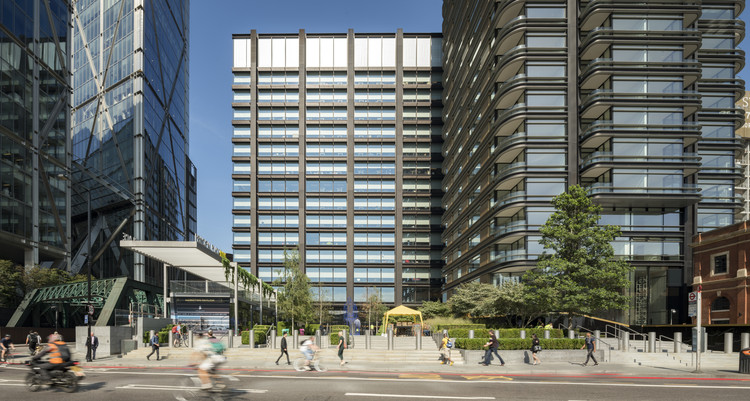 Text description provided by the architects. The completion of Principal Tower is the final piece of the Principal Place masterplan, a comprehensively planned mixed-use scheme on the border of Shoreditch and the City of London that creates a thriving new neighbourhood, drawing on the rich industrial heritage of the area. It comprises a 15-storey office building that hosts the London headquarters for Amazon, alongside one of London’s tallest residential buildings, the 50-storey Principal Tower, with six eateries that wrap around the building at street level and a light bar, creating a 360-degree active frontage that extends the vibrancy of the City towards the north.

The relationship between the creative, formerly industrial east end and London’s financial centre is expressed in the tower’s massing, which appears as three slim volumes. Where the tower addresses the residential neighbourhood of Shoreditch, it appears lower from ground level, while from the west it reflects the high-rise nature of the City. A central volume rises up between the two to provide an elegant marker on the skyline.

The 50-storey building offers a variety of apartment sizes, topped by spectacular penthouses on the top. Designed from the inside-out, there are eight apartments on a typical floor: four two-bedroom apartments that occupy the main corners of the plan, and four one-bedroom apartments. The square floorplate has been extended in the centre of two sides to create a cruciform plan and most importantly eight corners, each one of which forms a curved balcony. By maximising the perimeter in this way, all the units on the typical floors are dual aspect, with a very efficient plan that places the entrance at the heart of the apartment to eliminate unnecessary corridors. The bedrooms are enclosed by solid cladding panels for privacy, while the remainder of the apartment is fully glazed and protected by shading fins. Every apartment has a curved balcony at the corners that provides a double aspect with bronze exterior detailing – externally, this softens the tower’s profile, adding a rich texture, and creates a residential scale that contrasts with typical City buildings that surround it.

Providing 85,000 square-metres of flexible premium office space, the office building houses the UK headquarters of Amazon. The primary entrance to the building opens out onto a new plaza, creating an active interface with the surrounding urban environment, and generating a place that establishes connections within the community. Internally, the building is designed as a 21st-century warehouse that responds to the changing nature of the workplace, offering a more interactive and flexible model. Spanning over 100 metres, the innovative office floors allow for an exciting mix of spaces that operate at different scales, from large open-plan areas to small pockets of space that enhance collaboration and creativity.

Three ‘wing cores’ on the north and south façades provide points of natural contraction that impart a spatial rhythm to the interior volume, which is clearly articulated on the building’s façade. Its segmented form responds to Shoreditch’s industrial built heritage, bringing a sense of continuity to the streetscape as you move from the City to the north. The refined materiality of metal and glass offers a unique texture to the building, with an expressed bronze structural frame that references the historic cast-iron structures found in the area. 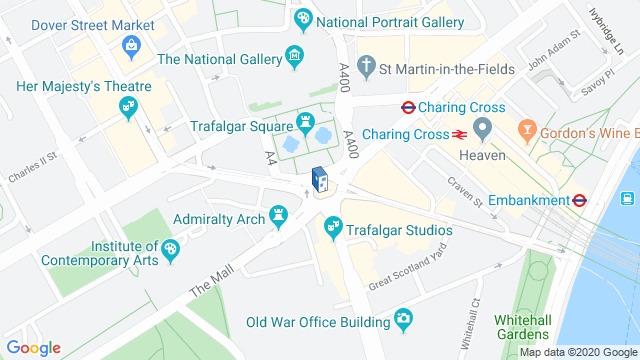 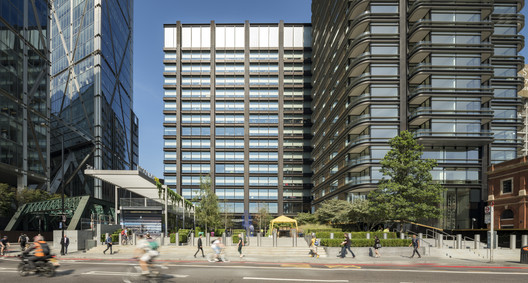