The New York City Planning Commission approved unanimously the design for 550 Madison Garden created by Snøhetta. The project that re-imagines the privately-owned public space will move forward, after also having received, earlier on, the approval from Manhattan Community Board.

Snøhetta’s design for the building’s public garden and revitalization of 550 Madison “re-envisions the building’s public space as a generously expanded, densely vegetated garden”. 550 Madison, conceived by Philip Johnson and John Burgee, was built originally in 1984. The postmodernist building, acquired by the Olayan Group in 2016, will be subject to renovation works, with a rethought interior that caters to the needs of an office tower and a reimagined public space. Creating a model of sustainable adaptive reuse, the project, scheduled to open later this year, will be granted LEED Platinum and WELL Gold certifications.

Philip Johnson and John Burgee’s vision for 550 Madison was to create not only a unique office building, but a dignified and attractive community amenity with public open space. Snøhetta is restoring their intention for the open space with a reimagined new public garden that will further improve the vitality of East Midtown, […] As the largest outdoor space of its kind in this district, the garden at 550 Madison will be a new anchor point in the heart of Midtown Manhattan, and a huge amenity to the local community and our world-class office tenants. -- Erik Horvat, Managing Director of Real Estate at Olayan America.

Embracing the contemporary and significant role of a privately-owned public space (POPS) in New York City, the transformation “invites people to slow down, linger, and connect to one another and their surroundings”. The large garden was re-designed in order to connect the building with other neighboring POPS as well as with the street life of East Midtown. Opening up at the west end of the tower, the new garden will transform the space into “a series of interconnected outdoor ‘rooms’ that provide both quiet spaces and larger, more open areas”. Inspired by Philip Johnson’s use of round figures, these circular rooms invite “passersby to linger as they meander through, allowing the garden to accommodate a variety of experiences for its visitor”.

Privately-owned public spaces are a critical part of New York City’s public realm. Urban life thrives in and around spaces that allow us to connect with one another and to nature […] Moreover, we need to make the most of the spaces we already have and recognize that they are part of a network that contribute to the livelihood of the city. We’re thrilled to be a part of renewing the future of this historic site. -- Michelle Delk, Partner and Director of Landscape Architecture at Snøhetta.

On another hand, the landscape follows the natural topography of the area and “lifts up along the west side of the garden”, highlighting a sense of immersion and providing concealed spaces for the tower service infrastructure. Creating a garden that is responsive to changing seasons, this urban habitat will also be home to a large variety of birds, butterflies, and other pollinators. Leading the transformation of East Midtown, the 850,000-square-foot building and its garden will re-connect the building back with the street's activities. 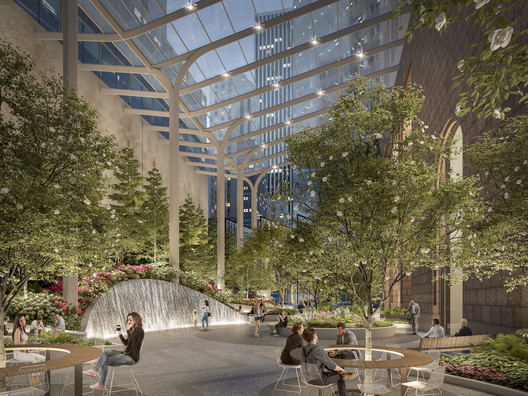