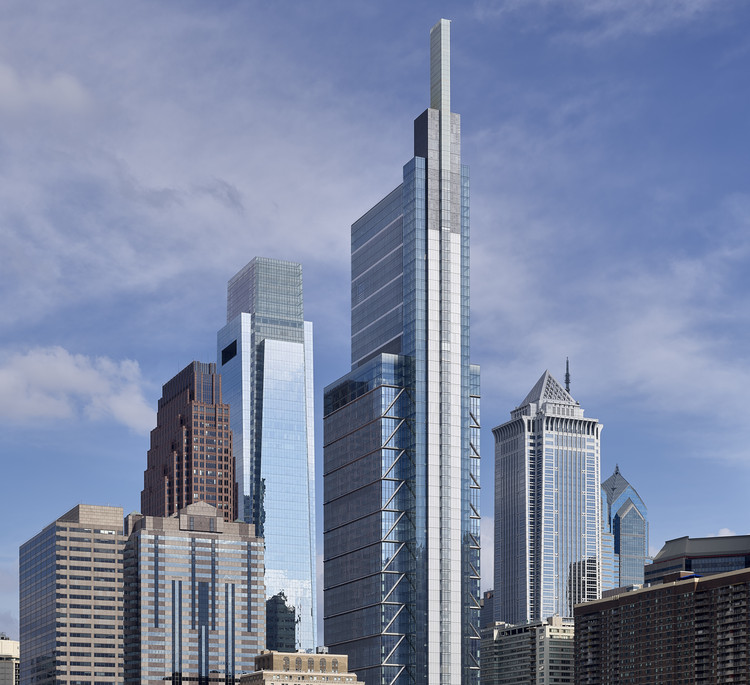 Text description provided by the architects. Located next to the existing Comcast Center, the Comcast Technology Center rises 1,121 feet (341 meters) as the city’s tallest building. The Comcast Technology Center is vertically stepped, with loft-like workspaces and state-of-the-art television studios for NBC10 and Telemundo62, with a 12-story Four Seasons Hotel above. At an urban scale, the project is conceived as a welcoming addition to the neighborhood, integrated with its shops, bars, and restaurants.

The 1800 Arch Street site is between the residential and social hub of Rittenhouse Square and the cultural district around Benjamin Franklin Parkway. Reflecting Philadelphia’s great civic tradition of public spaces, the base of the building features a sheltered winter garden that foregrounds the main entrance. This ‘urban room’ combines the best elements of a lobby, a plaza, and social spaces to create something completely new for residents and visitors of the city, featuring several site-specific works of art such as For Philadelphia by Jenny Holzer and Exploded Paradigm by Conrad Shawcross that animate the space. Rising up to the upper lobby level reveals The Universal SphereTM, a structure that houses a unique cinematic experience created by Steven Spielberg for all ages, exploring the power of ideas. The sphere is wrapped in a series of interlocking panels that create an infinite geometric pattern. The Vernick Coffee Bar located alongside welcomes visitors and employees to the building, offering both a ‘grab and go’ and table service.

Greg Vernick’s restaurant, Vernick Fish, occupies the entire northern edge of the building on the ground floor, responding to the city’s active street culture. Below street level, a sheltered subterranean connection passing through the center of the building, lined with shops, works of art and seating areas, links the existing Comcast Center with the new building and the city’s subway system.

The LEED Platinum design takes advantage of the city’s pleasant climate, offering protection from the harsh winters. The building utilizes an active chilled beam system which reduces the energy loads and creates a healthier working environment. The typical floorplate has been designed to optimize and control light levels through efficient glazing with high light transmittance and an automated blind system. Daylight penetrates into the interior spaces through triple-height sky gardens. The building also features systems to ensure water efficiency with green roofs, waterless urinals, and high-performance cooling towers.

Nigel Dancey, Head of Studio, Foster + Partners explained: “The Comcast Technology Center is like a city within a city, with a rich mix of uses that is embodied by its dynamic spaces – from the publicly accessible winter garden flooded with light, greenery and art for everyone, to the vertical loft-like workspaces in the sky which encourage innovation and creativity, three-story sky gardens with break-out spaces, restaurants and cafes, a state-of-the-art gymnasium, and a ‘town hall’ space that brings everyone at Comcast together. The cafes, restaurants and market stalls create a warm and welcoming experience, drawing people into the building. The drama continues with the Four Seasons Hotel at the top, featuring the amazing Jean-Georges restaurant that has unparalleled views of the city – rivaled only by the panoramic vistas from each of the rooms in the hotel.

This project has been six years in the making, where every detail has been thought through. It has been an absolute privilege to work with this great team put together by Brian Roberts, with Four Seasons bringing high-level service and hospitality, Jean-Georges and Greg Vernick, serving amazing food, and Jeff Leatham with his spellbinding floral arrangements. This is a testament to what the term collaboration means.”

The service core of vertical circulation is split, creating a visual axis through the building to Comcast Center and a clear orientation spine. This central spine is articulated at the top of the building as an illuminated blade of glass, which extends 125 feet (38 meters) high to provide a marker on the skyline. The building’s facades are animated by panoramic glass elevators and a series of thirteen three-story sky gardens, which rise up to draw a continuous strand of active spaces through the building. The large, open floor plates are filled with daylight – each office level is equivalent in scale to twelve tennis courts. The interior is fluid and dynamic, with loft-like, highly flexible spaces designed to allow staff great freedom in choosing where and how they work.

The Four Seasons Hotel on the upper floors of the building features a series of dramatic spaces, beginning with the reception located on level 60. On arrival guests are greeted by the first glimpses of the panoramic views and are led through the axial flower-lined canyon towards the Jean-Georges lounge, Sky High, which unfolds in a dramatic bar and relaxed seating as guests descend a monumental staircase flanked by two black stone ‘water-walls’. The restaurant is a soaring triple-height space, fully glazed on three sides. The unique pyramidical mirrored ceiling that stretches across the length of entire floor infuses the space with dynamic reflections while multiplying the views of the skyline at eye level.

The hotel comprises nine floors of guest rooms. The building’s circulation follows a defined pattern on every floorplate – an internal ‘street’ runs along the center from the elevators to the eastern edge, where the suites are located. Curved corners mark every room door to enhance the impression of space – a language that continues in the interior layout of the rooms. Each one has full-height glazing, a 10-foot floor-to-ceiling clearance, walk-in wardrobes, a wall screen displaying digital art by Brian Eno, all complemented by a warm palette of materials and bronze tones. The bespoke furniture used throughout the hotel – in the public areas as well as the rooms – has been designed by the practice. 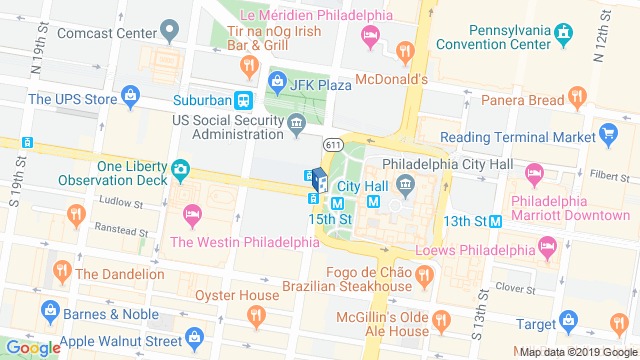