In architectural spheres, “accessibility” is often directed at the end-user, and the imperative act of designing spaces, buildings, and entire cities along the principles of “universal design.” An increasingly central aspect of architecture, spurred by legislation such as the 1990 Americans with Disabilities Act (ADA), the ethos of accessible architecture was well captured by architect Ronald Mace, quoted in a 1997 New York Times editorial asking “if we’re not designing for human beings, who are we designing for? Let’s design all things, all the time, for everyone. It’s where we’re headed.”

More than twenty years later, architects and urbanists have unparalleled tools at their disposal for placing accessibility at the center of design. From simple online guides to using ADA standards, to basic Revit models for accessible bathrooms, the digitization of architectural tools, knowledge, and inspiration allows the design team to consider everything from elderly-friendly cities to accessible door handles.

In addition to accessibility as a design principle, it is also important to consider accessibility within the architectural industry itself. As the profession tries to respond to climate change, climate migration, automation, and countless other challenges, it is imperative that no talent is left on the sidelines. While we celebrate the growing number of female architects reaching the pinnacle of the industry, and symbolic gestures such as Julia Morgan’s “Overlooked” obituary in the New York Times, we still operate in a system where fewer than 2% of U.S. architects are African American, and only 18% are women. Just as it ought to be possible to design and build an architecture that is accessible to all, regardless of background, ability, or financial means, it ought to be possible to design and build an architectural profession accessible to designers of all ages, genders, nationalities, and creeds.

That is why we dedicate this month to accessibility, featuring everything from design guides for accessible bathrooms to reflections on urban mobility and racism. Despite the wide variety of topics on display, this month’s content is united by a common goal of promoting accessibility as a prerogative of architectural design, and a staple of the architectural profession.

We are now receiving submissions related to our Monthly Topics. For our next issue, in September, we will be focusing on “Work.” In this dialogue about the future of architecture, we always want to hear about your ideas, projects, essays, and articles, so get in touch by sending us a message. 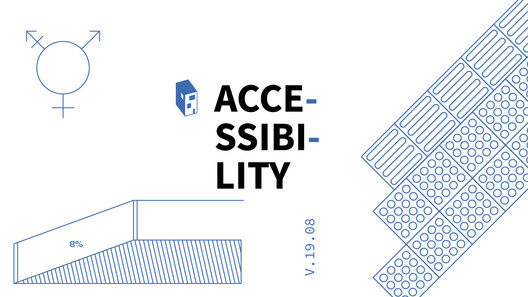