Bar producer Makr Shakr has unveiled new rooftop robotic bars in Milan and London. Founded by MIT professor Carlo Ratti, the company's new projects are made to engage with the city and explore the potential of technology. In Milan, the project is the city's first robotic bar, while the London bar is on display at the Barbican as part of its AI: More than Human exhibition. Makr Shakr's bars aim to combine barman roots with food tech around the future of human-machine collaboration. 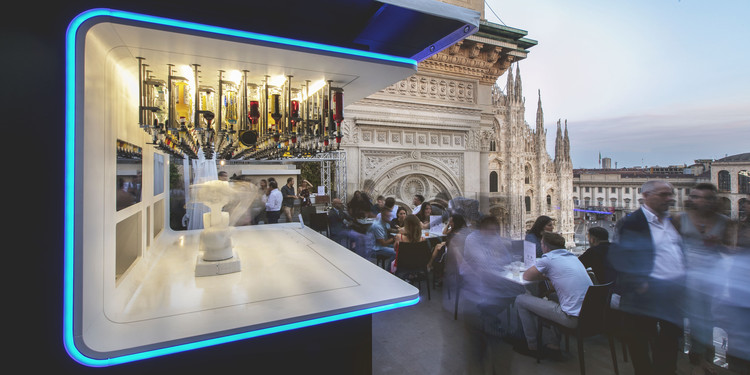 Overlooking the iconic cathedral, the Milan bar is located on the rooftop of luxury hotel TownHouse Duomo and open to the public from 26 July 2019. Coming to life in the city with the tagline from the 80’s christened as ‘Milano da bere’ (‘Milan to drink’), The View by Makr Shakr celebrates the metropolis that created the social ritual of aperitivo. The View allows guests to enjoy robotic-made drinks, both classic cocktails and mocktails including the T+ based The View, a bergamot tea liquor created especially for the bar.

Modelled on the gestures of Italian dancer and choreographer Marco Pelle from the New York Theatre Ballet, the robotic bar by Makr Shakr is the most advanced drink-mixing robot ever put on the market, available for purchase or rent. Combining Italian craftsmanship with high-end technology and finishes, the robotic bar features two mechanical arms that can precisely prepare and serve any drink in seconds – shaking, stirring, and muddling with coordinated movements. It can manage more than 150 bottles of different spirits hanging from the ceiling of the bar structure to create an infinite combination of drinks.

Using Makr Shakr’s exclusive mobile app, users can either select pre-made recipes developed by international bartenders, or create and name customized cocktails of their own. ‘The View by Makr Shakr shows how technology can empower people’, comments Emanuele Rossetti, CEO of Makr Shakr. ‘It is not about replacing humans with robots but allowing robots to be extensions of our arms. In short, you are the bartender.’

‘Industrial robots are going to change the global workforce, but many people have never had the opportunity to see them – let alone interact with them’, adds Carlo Ratti, founding partner of CRA-Carlo Ratti Associati firm that designed the system. ‘Our motivation is in creating novel opportunities for people to interact with new technologies.’

Toni is on display at the Barbican as part of its AI: More than Human exhibition. Installed on Level G, Toniserves a variety of classical cocktails and mocktails, including More than Human which has been created to pay homage to the current exhibition. On August 7 at 6pm, Toni will also challenge its human counterparts to make the perfect Negroni in celebration of the 100th anniversary of the Italian classic cocktail.

Launched in 2014 from the innovation and design practice Carlo Ratti Associati founded by MIT professor Carlo Ratti, Makr Shakr has since become an independent company serving over one million cocktails to thousands of people internationally. Industrial versions of Makr Shakr’s bars are permanently installed aboard six Royal Caribbean cruise ships, while other editions can be seen in the US (Las Vegas and Biloxi), France and the UK. The news follows Carlo Ratti Associati's work with Makr Shakr to design a driverless robotic bar which “aims to propose new on-demand ways to enjoy leisure in cities.” The project features two mechanical arms with the ability to precisely prepare and serve drinks in seconds, mounted atop an autonomous vehicular platform. 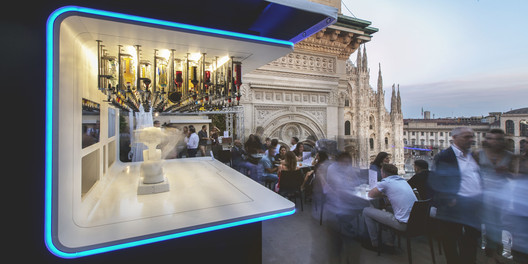