Carlo Ratti Associati has teamed up with Makr Shakr, the world’s leading producer of robotic bartending systems, to design a driverless robotic bar which “aims to propose new on-demand ways to enjoy leisure in cities.” GUIDO (Italian for “I drive”) features two mechanical arms with the ability to precisely prepare and serve drinks in seconds, mounted atop an autonomous vehicular platform.

Self-driving technology allows GUIDO to weave through the built environment, responding to bookings from a customer app. As orders are placed through the app, GUIDO sources the cocktail’s components from bottles stored on the counter, and prepares the drink on site. GUIDO’s system also performs ID age verification and supports paying via mobile phone.

More than an experiment of new technologies, GUIDO also seeks to imagine new social opportunities in future cities. With many cities following a trend of small, bustling central areas and peripheral, lifeless, sometimes unsafe suburbs, GUIDO offers an alternative where different parts of the city can be activated by on-demand leisure. The opportunity also exists for new social dynamics, with customers creating smaller hubs of activity to unite neighbors who might not otherwise encounter each other.

GUIDO is the application of a city-on-demand paradigm. By matching Makr Shakr’s robotic bartenders with the mobility systems of the future researched by CRA, we can put forward a new idea for the experience of leisure. Our company has always encouraged a paradigm of participation when it comes to making your own drink. Now, what happens if you extend the same approach to the city? With GUIDO, we show how technologies can make cities more responsive, and ultimately more fun.
-Emanuele Rossetti, CEO of Makr Shakr

The project follows on from Ratti’s numerous experiments and propositions for future cities as part of the MIT Senseable City Lab, as seen on our roundup of the lab’s best ideas. He was also recently announced as the curator of the 2019 Shenzhen Bi-City Biennale of Urbanism/Architecture, where he will explore the impact of artificial intelligence on cities.

Ratti has also recently designed a series of low-cost prefabricated houses for rural India, allowing homeowners to build any structure they like on top of it. 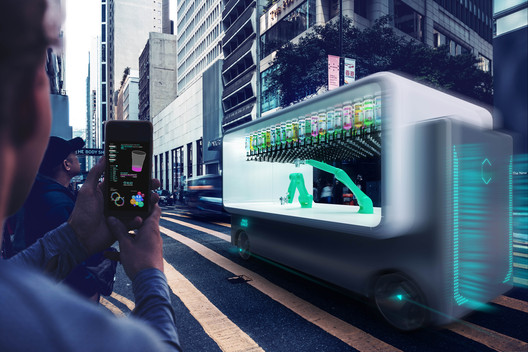