A multi-purpose building planned to hold the development’s marketing suite, Mach 1 will include a large, gallery-like exhibition space and coffee bar to give it the flexibility to host events at various scales. To fulfill its marketing function, the building is slated to display a full site model, detailed building models, illustrations, and informational displays about the southern phase of construction of Edinburgh Park itself.

Edinburgh Park is planned to be a 43-acre urban quarter west of the city of Edinburgh, the largest single-site development currently underway in the city. Master-planned by Dixon Jones, the project follows previous successful collaboration with Parabola at the award-winning Kings Place development in Kings Cross. Edinburgh Park is currently in the planning stages, with Mach 1 itself having recently been submitted for planning. The first phase of development will include high quality offices, a new public square, sports and leisure facilities, a health center, shops, bars, and restaurants.

The development also includes a strong public arts component, supporting two residencies for emerging writers and photographers, as well as offering outreach opportunities with local schools. Mach 1 is emblematic of the artistic focus of the development, “His vision of this unique installation perfectly tunes with Parabola’s ambition for a bold and exciting quarter of the city which marries exemplar design and innovation to deliver a new place in the city rich in art and culture, with world class public space, landscape and amenities,” comments Parabola’s founder and chairman, Peter Millican.

Known for his dynamic and large-scale collage, sculpture, and installations, often using everyday items, Mach describes himself as an “accidental architect” when it comes to the commission of Mach 1. “There is quite a dramatic shape to the building, not a regular piece of architecture. It will be something that you really notice. It is a building that really makes a statement about itself,” says Mach about his design. 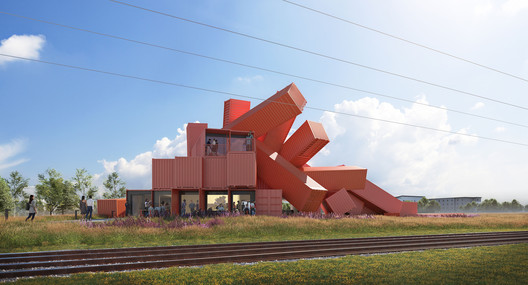