Save
An (ab)Normal Take on Architectural Representations
Share
Or
Copy

Contemporary visualization tools have rendered exceptional illustrations, proving to be crucial in architectural representations today. However, some choose to explore objects in unprecedented manners instead of diving into "digital post-collage", unleashing different realms of design.

Created as an experimentation of visual narratives, (ab)Normal is a graphic patchwork that expresses design, scenography, illustration, architectures, and social utopias of a culture that revolves heavily around Internet, gaming, and religion. The iconographic images, which particularly focus on architectural representation, explore all the potentials of rendering, deconstructing, and reassembling photo-realism with a different hierarchies. 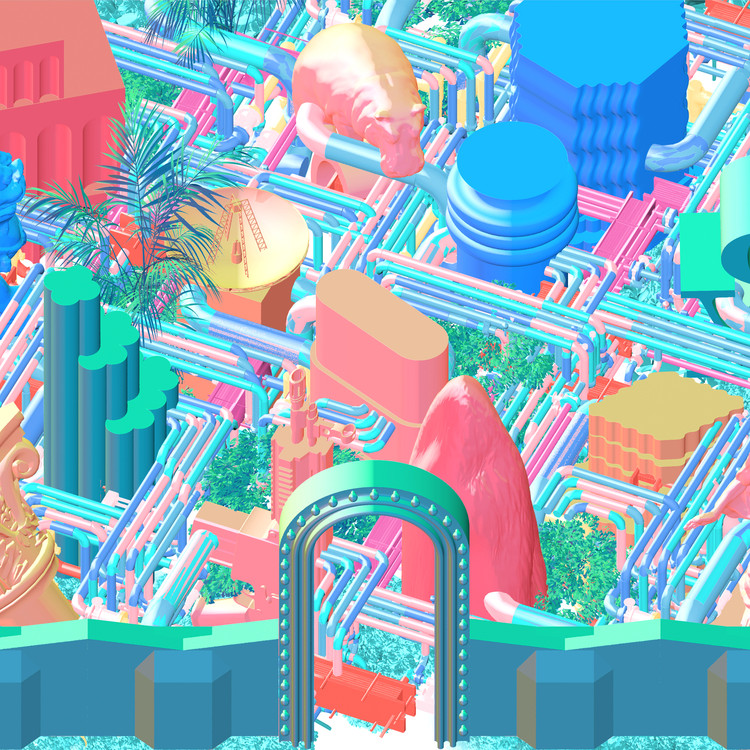 Flying over the park Elliot was wondering “Did we really abandoned objects? Are they obsolete artifacts? Likes swords or shields or television or computers? Was it necessary to implement IPV6?” His nostalgia fought with the euphoria instigated by the orgiastic pattern of pipes and simulacra in front of him.He felt convulsions and drool taking over his body. “Cover your eyes” he said to Sara, pressing her head next to his chest.

“...There are doors that open by themselves...” Some weird glitches deconstructed the image for one second. It turned again fleshy and sweaty. “...There are sliding doors...”. This time the image got stuck in a schizophrenic loop. “...And there are secret doors...”

The graphics are a result of a long time collaboration between designers Luigi Savio, Davide Masserini, Mattia Inselvini, and Marcello Carpino. While working as architects, the four were unsatisfied while trying to represent architecture through a massive use of digital tools, which is why they teamed up to create this visual project. The architects found inspiration in movies, novels, and artists, who reinterpreted non-linear narratives and resorted to reusing objects in different representations that translate their architectural fantasies.

How do you know they’re all female? Did somebody walk into the enclosure and looked under the dinosaur’s skirt?

Do not say,
“Why is that the former days were
better than these?”
For it is not from wisdom that you ask
about this.
Ecclesiastes, 7:10

All the three-dimensional models of architecture neglected in their embryonic state, all the formal obsessions that we fail to express become the basis of three-dimensional taxonomies and collages, collections that express our personal artistic education and simultaneously give new life to a whole ecosystem of 3D models downloaded from the internet, exploited only once and then forgotten in some sharing platform. - Designers of (ab)Normal

It was all about XYZ, grid control, densification. Zoe was wandering around those enormous fields of robotized agriculture when a lullaby came to her head:
“I like to think of a cybernetic meadow where mammals and computers...”

The Ten Incarnation Of The Self

He finally reached the altair, where identities were built. “What colour you want to emanate today?” He remembered the last day of school, the day they were finally allowed to be whatever they dreamt to become. That was the day Elliot chose to be a punk.

25°20’42”S 131°02’10”E was written on the screen of the computer.
Uluru was the destination that had been decided the day before, but what they were looking at was nothing of the sort.

There was history,
there was modernity,
there was contemporaneity.
There was nature, there was scenery.
No living beings though, except for one brave crane.

In our case we try to best interpret the strange intersection between Internet, gaming and religion, using architecture as a representation tool rather than devoting ourselves to the representation of architecture. We try to address and understand current issues through a language that is most familiar to us for cultural education: architecture. To conclude, (ab)normal does not have a specific agenda or a clear line of intent, rather it represents a totally idiosyncratic way of dealing with contemporaneity. - Designers of (ab)Normal 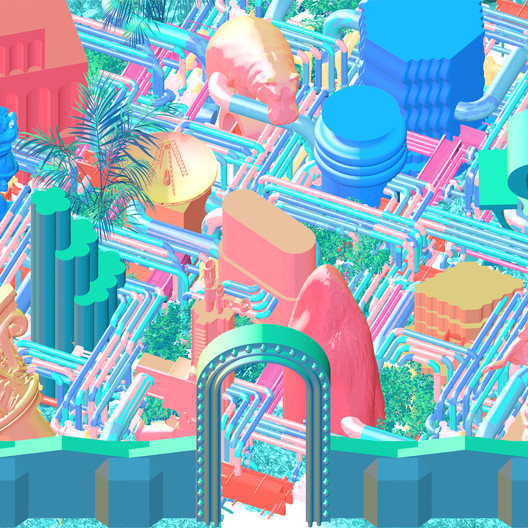