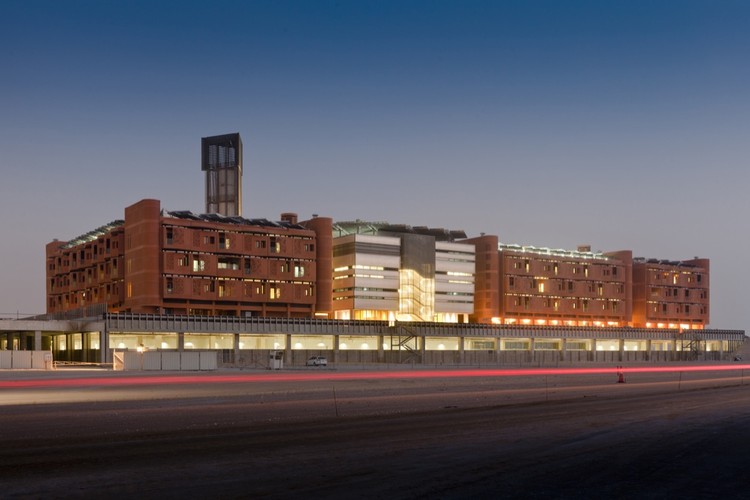 Text description provided by the architects. Today marks the offical opening of the first solar powered building at Masdar City. The Masdar Institute (MI) campus is entirely powered by renewable solar energy, with a 10 megawatt solar field providing the Institues energy. This solar field by the way is also producing 60% more energy than what MI consumes and its left overs will be fed back into the Abu Dhabi grid. The post graduate students will be the city's first residents, and the data from the sustainable technologies at MI will be surveyed assisting in the implementation of these practices in future Masdar City buildings.

“Many have dreamed of a utopian project that would be solar powered. Today’s official opening of the initial stage of the Masdar Institute campus at Masdar City is a first realisation of that quest. Its student community is already active, living and working in their quarters. This community, independent of any power grid, develops a surplus of 60 percent of its own energy needs, processes its waste water on-site which is recycled and pioneers many energy saving concepts. It is a bold experiment which will change and evolve over time – already it houses twelve separate research projects with potential world-wide applications.”

The campus, which consists of a main building, a knowledge centre and students’ quarters, will use significantly less energy and water than average buildings in the UAE. In particular, the Institute and its facilities use 54 percent less potable water, 51 percent less electricity and are fully powered by solar energy. These reductions are based on comparisons to UAE standard baselines for buildings of similar size and specifications. Around 30 percent of the campus’s energy will be covered by solar panels on the roof, with 75 percent of hot water also being heated by the sun.

The Institute demonstrates the sustainable principles underpinning the overall masterplan. The buildings have self-shading facades and are orientated to provide maximum shade as well as sheltering adjacent buildings and the pedestrian streets below. Over 5,000 square metres of roof mounted photovoltaic installations provide power and additional shading at street level. Windows in the residential buildings are protected by a contemporary reinterpretation of mashrabiya, a type of latticed projecting oriel window, constructed with sustainably developed, glass-reinforced concrete, coloured with local sand to integrate with its desert context and to minimise maintenance. The perforations for light and shade are based on the patterns found in the traditional architecture of Islam.

The laboratories and residential accommodation are supported by a variety of social spaces, including a gymnasium, canteen, café, knowledge centre, majlis – or meeting place – and landscaped areas that extend the civic realm and help to create a new destination within the city. One, two and three-bedroom apartments are housed in low-rise, high-density blocks, which act as a social counterpoint to the educational laboratory environment.

This building is the first of four planned phases that will bring the eventual student population to 600-800. Four residential blocks surround a central laboratory and the Knowledge Centre, the first in a series of additional campus buildings, which will include a mosque, conference hall and sports complex. The second phase is due to start on site by the end of the year to include further laboratories and apartments. The Masdar Institute is accessed by 10 personal rapid transit (PRT) cars that are being run as a pilot project from the City perimeter to the undercroft below the building.This project signals Abu Dhabi’s commitment to creating an international centre to pioneer sustainable technologies within an environment which is itself carbon neutral.

• The Masdar Institute’s graduate-level programmes were established and accredited in collaboration with the Massachusetts Institute of Technology (MIT) in Boston and focus on scientific engineering and research in the core energy and sustainable technologies of the Masdar Initiative.

• The buildings are oriented to provide optimum shade and reduce cooling loads and shaded colonnades at podium level bring benefits through high insulation and exposed thermal mass. Transitional thermal spaces are also integrated – these mediate between internal and external zones and are conditioned primarily by buoyancy-driven natural ventilation and the effects of thermal mass.

• The ventilation strategy for the pedestrian streets and night time cooling is further enhanced by wind towers and courtyards. Pedestrian circulation is mostly at street level, where a shaded route throughout the campus links these primary spaces.

• The green linear park adjacent to part of the buildings captures cooling night-time winds, while wind gates control hot winds. The public spaces within the development are designed as lively social hubs, naturally cooled by shading, green planting and a small number of water features, to mitigate the effects of the intense local climate.

• The ratio of open facades is varied between shaded lower areas and exposed upper areas. Openings in the façade vary according to their position – the upper floors are more solid, with approximately 25 percent glass, while the shaded lower floors have a greater proportion of glazed area, around 45 percent.

• The laboratory facades incorporate ETFE, inflatable cushions made of a lightweight polymer, and have been designed to filter and reflect light into the street, without radiating heat.

• The laboratories – and an interactive laboratory space – are at the heart of the development and are designed to offer the largest flexible, column free space possible within the strict loading and vibration criteria. Support facilities are arranged in a functionally efficient, linear layout adjacent to the open laboratories and a central café creates an informal space for researchers and staff to meet.

• All sewage is processed on site and recycled.

• Mashrabiya is the Arabic term given to a type of projecting oriel window which was traditionally enclosed with carved wood latticework. Referencing traditional Arabic architecture, it is used primarily on the street-facing aspect of the building. 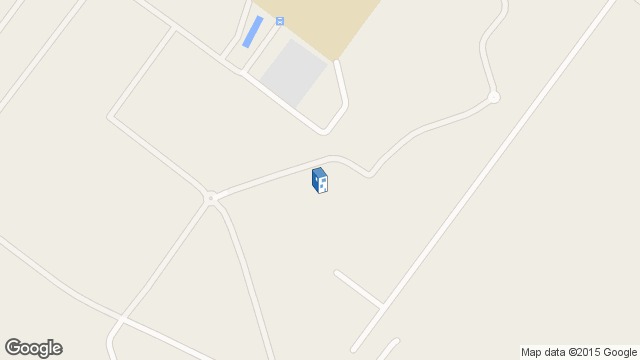 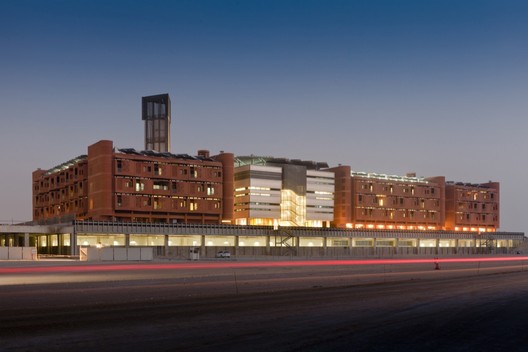