Five design teams have been selected to present their ideas for the Chicago O'Hare Airport Global Terminal and Global Concourse expansion. The designs are on display at an exhibition opened by Mayor Rahm Emanuel at the Chicago Architecture Center. Teams include Fentress-EXP-Brook-Garza, Foster Epstein Moreno, Studio ORD, SOM and Santiago Calatrava. Known as O’Hare 21, the project represents O’Hare’s first major overhaul in 25 years. 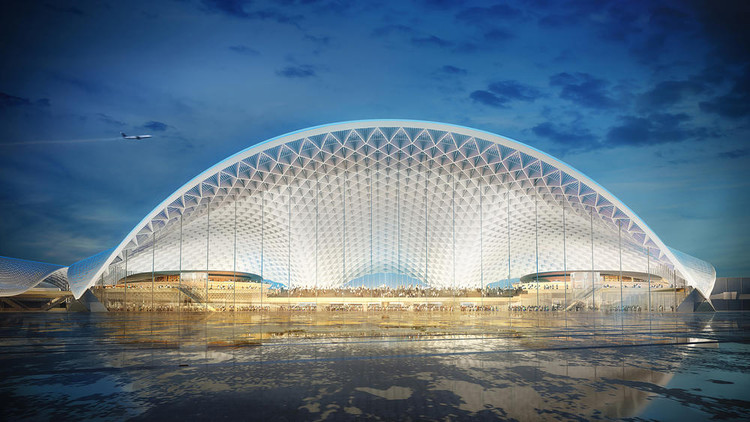 The new terminal will replace the existing 1960s Terminal 2 with a global terminal that reflects the legacy of Chicago's innovation, architecture and diversity. Mayor Rahm Emanuel said that selecting an architect for the project is a key priority before he leaves office next May. The project calls for two satellite concourses to be built as part of the expansion. The airport’s total terminal area would grow from 5.5 million to 8.9 million square feet.

The joint venture led by Foster + Partners, Epstein and Moreno created a new vision for a gateway to Chicago to capture the city’s progressive spirit and its architectural legacy. The team includes multi-disciplinary design and construction company Epstein, as well as the architecture and design practice JGMA. Norman Foster, Founder and Executive Chairman, Foster + Partners said: “I remember coming to Chicago as a graduate and being captivated by the energy, the extraordinary location, the music the culture, and the outdoor sculpture – all of those influences blend together in our proposal.” The proposal includes sweeping arches that merge into a single curve.

Studio ORD Joint Venture Partners is led by Chicago’s Jeanne Gang, and the team's design was formed as a three-part terminal around a large atrium. The proposal stands apart for its signature use of wood in the ceiling of the terminal. The design was inspired by the airport’s original name, Orchard Field, and the interior of the project reinterprets this through an organic design and natural plantings.

Calatrava’s plan includes the global terminal and a business complex with formal gardens that would remake the present site of parking facilities next to the terminals. The terminal is formed with a pointed form featuring a white roof overhang. The terminal’s interior features Calatrava's white-on-white uniform surfaces with plenty of natural light.

Fentress-EXP-Brook-Garza Joint Venture Partners created a scheme where a curving, upturned roof creates a vast open space. Inside, bright white surfaces and columns meet tall glass walls. The team stated that, "Our vision is to return the romance of air travel to all who pass through Chicago’s O’Hare."

Officials hope to complete the multi-phase O’Hare 21 project by 2026. An exhibition of the designs is on display at the Chicago Architecture Center, 111 E Upper Wacker Drive. The public are invited to view the proposals online and vote for their favorite scheme: https://voteord21.flychicago.com/home/pages/default.aspx. Voting ends on 23 January. 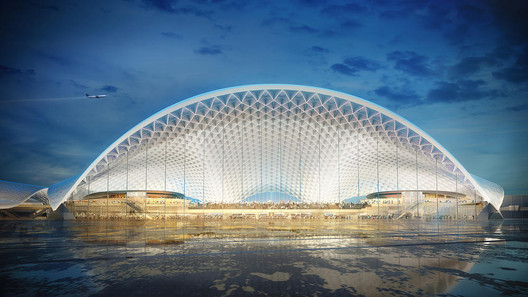