Herzog & de Meuron have released more images of their Gasklockan tower project in Stockholm. First announced late last year, the design will replace a 1930s gasholder with a 90 meter tower. As the firm's first project in Sweden, Gasklockan tower is being created with developer Oscar Properties. The latest images showcase the interior of the project and details of the facade. Designed with over 300 apartments, the circular tower was inspired by the original gasholder on site. 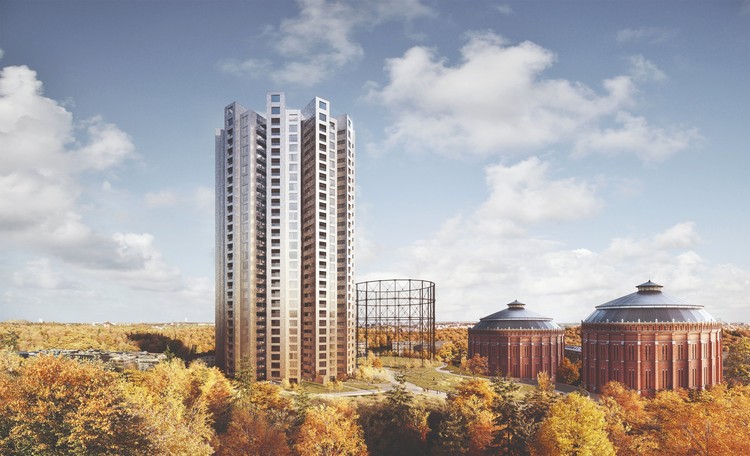 Located in the north of Stockholm in Hjorthagen, Gasklockan tower is situated in an area designated the world’s first National Urban Park. The site is characterized by an industrial complex designed by Architect Ferdinand Boberg from the late 19th century with two historical brick gasholders and buildings that served the gas production. A curved path will surround the hill providing calm spaces where people can meet, enjoy the new park or move ahead to the residential tower with a café, bistro & bar, offices and a kindergarten on the ground floor.

"Gasklockan is our first project in Sweden and the first building with this shape," said Jacques Herzog, co-founder of Herzog & de Meuron. "Its floor plan opens like the pages in a book to the surrounding city and landscape, maximising sun exposure and offering a variety of views. It offers a spatial experience not normally experienced when living in a tower." Wrapped in glass bricks of different shades of subtle colors, the façade references Boberg’s brick gasholders. A wildflower public park will also be created by Piet Oudolf around the development.

Construction on Gasklockan is planned to begin by the end of 2018 with completion scheduled for 2022. 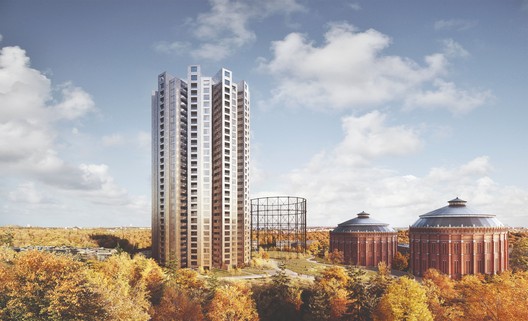