New images have been published of Grimshaw and Arup-designed stations for the UK’s ”High Speed 2” railway system. Connecting London to the British Midlands, the mega-infrastructure project will be the UK’s second high-speed rail system, with HS1 already connecting London and the South East to the Channel Tunnel.

The Grimshaw and WSP-designed Curzon Street station in Birmingham will be the first brand new intercity station to be built in Britain since the 1800s, while Interchange Station, designed by Arup, will serve as a gateway station to the West Midlands and Birmingham Airport. 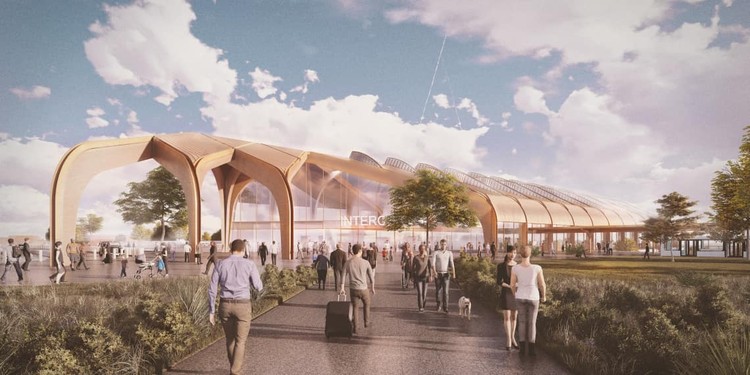 Curzon Street will feature 7 high-speed platforms when opened in 2026, while also functioning as a public space for Birmingham city center. Integrating with the city’s tram network, the scheme will sit at the nexus of pedestrian, cycle, taxi, bus, and rail connections.

The scheme’s West concourse features the “ambiance of a modern airport terminal” under a grand arched space, while the East concourse encompasses the historic Curzon Station building to revitalize the surrounding area.

HS2’s new Curzon Street station is inspired by the best station design of the past, inspired by Britain’s pioneering railway and industrial heritage reimagined for the 21st century. The elegant sleek low arch which will make the station instantly recognizable in the surrounding area and its warm coffered soffit will join the growing list of modern Birmingham icons.
- Neven Sidor, Lead Architect, Grimshaw

The Arup-designed Interchange station will feature a roof designed to integrate with the surrounding landscape, with environmental considerations such as a rainwater management system and daylight-maximizing form.

Interchange station sits within a unique setting, on the edge of the urban landscape in a currently rural location. The station building has been designed to reflect its surroundings and in context with the natural landscape and topography.
-Kim Quazi, Lead Architect, Arup

A series of public engagements will be held throughout October 2018. The stations are expected to be completed by late 2026.