Save
China's Mega Industrial Regeneration Project has Lessons for the World
Presented by:

Across the world, developed cities are rebelling against heavy industry. While some reasons vary depending on local circumstances, a common global drive towards clean energy, and the shifting of developed economies towards financial services, automation, and the gig economy, is leaving a common trace within urban centers. From Beijing to Detroit, vast wastelands of steel and concrete will stand as empty relics to the age of steel and coal.

The question of what to do with these wastelands, with defunct furnaces, railways, chimneys, and lakes, may be one of the major urban questions facing generations of architects to come. What can be done when the impracticality of industrial complexes, and the precious land they needlessly occupy, collides with the embodied energy, memories, and histories which few would wish to lose? 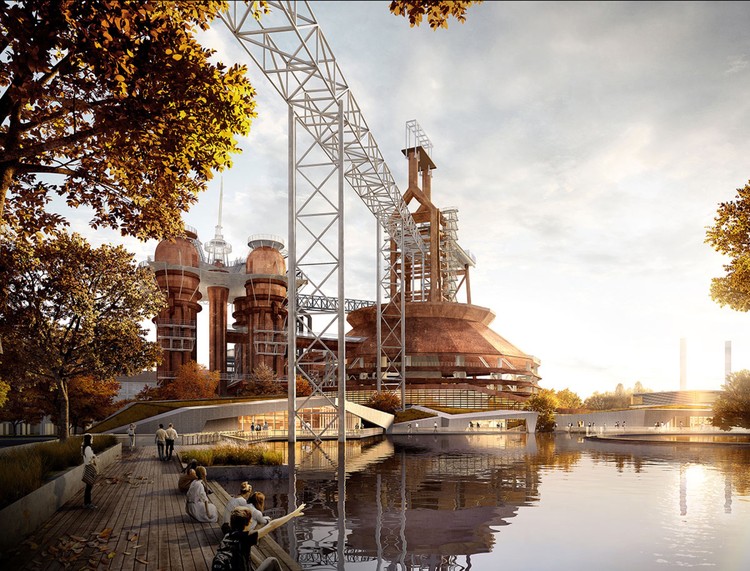 In Beijing’s Shijingshan District, a major public project is being undertaken which may provide an answer. The Shougang Industrial Regeneration Project, the first of its kind in China, is being overseen by a young Chinese architecture firm determined to realize a vision for industrial regeneration whose value extends far beyond China, serving as a case study for both East and West.

Since 1919, the Shougang Corporation (previously the Capital Iron and Steel Corporation) has used the Shougang industrial area as the base for one of China’s largest steel companies. As China reformed and opened out to the world during the 20th century, Shougang’s growth was exponential, covering steel manufacturing, mining, machinery, electronics, and real estate.

As Beijing’s urban footprint expanded, it enveloped the vast industrial site. When the city was chosen to host the 2008 Olympic Games, the Shougang site was decommissioned due to concerns over air pollution, the companies operations relocated. The site has lain in dereliction for the past 10 years. As Beijing prepares to host the 2022 Winter Olympics, Chinese planners are working on a project to bring the ruins back to life.

The vision of young Chinese architecture firm CCTN Design, and chief architect Bo Hongtao, the Shougang industrial area will be repurposed as a base for the Winter Olympic operations, as well as a Museum of Regeneration. Seeking to form a “new paradigm for urban development,” the scheme walks a careful balance between the retention of collective memories of the site’s old function and the reinvigoration of the site in response to contemporary demands.

The scheme’s centerpiece, the “Museum of Regeneration of Shougang No. 3 Blast Furnace,” will be the first regeneration project of blast furnace and ancillary facilities in China, and one of few in the world. The removal of unnecessary buildings allows for an open dialogue between core industrial structures and a surrounding park landscape while showcasing the mammoth blast furnace apparatus as both a homage to Chinese industrial history.

Underneath the blast furnace’s ancillary cooling pool, a parking lot will link to an underwater art exhibition hall, where visitors can interact with artwork and contemplate the 100-year history of the site through interaction with the water, and views of the blast furnace structure.

More than a museum for collective memory, the site also serves a valuable contemporary addition to Beijing’s urban realm. As well as being a base for the Winter Olympics Service and International community, the scheme will contain extensive public landscape, restaurants, teaching facilities, and artistic exhibition space.

The scheme is one of several implemented following the awarding of the Winter Olympics to Beijing. In the year since the concept of Winter Olympics was confirmed, Shougang successively implemented the National Sports Industry Demonstration Park, the National Sports Administration Winter Training Center, the 2022 Winter Olympics BIG AIR Aerial Skills Grand Jumping Stadium and a series of related supporting R&D offices, hotel leisure, exhibition display, media production, and commercial services in the North District of Shougang Park.

As part of the celebration of the Shougang project, the team behind the project have collaborated with an interdisciplinary group of curators, artists, novelists, and musicians to create an installation running in parallel with the 2018 Venice Biennale throughout the month of October, serving to exhibit the historic memories of the Shougang site, and the regeneration scheme to bring it back to life.

The exhibition was initiated by Bo Hongtao who served as the chief planner. Curated by Wang Zigeng and Bo Hongtao, “Steel Home Still” sees a sharp, contemporary, steel pavilion placed inside the neo-classical Santa Caterina Church. Aside from the impressive scale model of the Shougang Blast Furnace, located in a prime position facing the church alter, the installation contains a series of “typical rooms” reminiscent of Shougang’s industrial past: the dormitory, the workers club, the drawing room, and the furnace preparation room.

Employing film and stage set decoration, photography, multimedia creation and graphic design, each room uses space, objects, and texts to convey the life of fictional, yet typical workers of the Shougang steel site, brought into existence by novelist Jiang Fangzhou. Through the exhibition, the design team “hope to unveil the microhistories at the level of individuals and families.”

More than an exhibition of design and ingenuity, “Steel Home Still” functions as a forum for idea sharing between East and West. This was demonstrated at the opening event, where experts from the fields of architecture, sociology, and urban design from Europe, the Middle East, and China converged to share their perspectives on the importance of industrial regeneration, and how the Shougang project can act as a catalyst for similar schemes around the world.

Common to all participants, including IUAV University professor Alberto Cecchetto and former UNESCO Assistant Director for Culture Francesco Bandarin, was a reflection that industrial regeneration poses a global challenge and opportunity, both for the retention of local and national identity and for the repurposing of vast landscapes which are soon to become redundant.

Citing examples such as the Bagnoli Steel Plant in Napoli by Francesco Cellini, the Renzo Piano masterplan for the Flack Steelworks site in Milan, and the heavy concentration of adaptable industrial heritage structures currently being addressed in the Ruhr Valley, the panel stressed the value of post-industrial sites to enhance quality of life, generate tourism, and improve regional image, through the application of considered, sensitive, adaptive design.