Sergey Skuratov, founder of Sergey Skuratov Architects, an award-winning Russian practice (2008 Architect of the Year), is known for his sleek and well-composed portfolio. Projects such as Copper House, Art House, and House on Mosfilmovskaya Street demonstrate his sensitivity to materiality and ability to retain his vision from concept to reality. Over the last two decades Skuratov has succeeded in producing a whole strata of world-class architecture in Moscow, far more than any other local practitioner. His projects, predominantly residential and office complexes, have remained attractive and versatile without ever veering into conservatism. 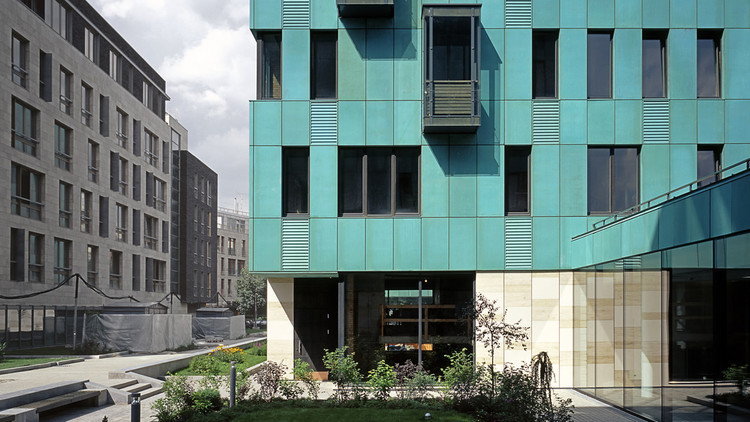 Vladimir Belogolovsky: Speaking of a site that you were given for one of your projects you said, “How chaotic, repulsive were the surrounding structures. It was unclear if it was possible to bring any order there, to do anything sensible compositionally or stylistically.” Do you think bringing order to a particular environment is the purpose of architecture?

Sergey Skuratov: Of course not. What is order? It is something quite relative. Order is a total myth, it can only exist on paper. There can be no order in a real city. There are so many traces of whatever people do, so many layers of numerous contradictory functions. To find certain existing logic or to propose a new one in these many traces is an incredibly complex problem for an architect. Any city is very complex and even chaotic. The aim of any architect is to realize his own legends, myths, and worlds that he dreams about. Perhaps the most important thing for me is to contaminate my client with my interest, passion, and conviction. And not just the client but the city government, contractor, and so many others to realize that one particular world that I conceived.

VB: Perhaps your most distinctive realization to date is your House on Mosfilmovskaya Street, a highly visible dual skyscraper here in Moscow. I know that your client challenged you to build a kind of building that no one has ever built before. Not just in Russia but anywhere in the world. Is this something that you encounter often, and do you strive to invent such architecture that hasn’t existed before?

SS: What I can say is that during this project my client, Maksim Blazhko, the founder of Don Stroi development company, and I resembled two kids playing with the future. We were both enthused by this project and most of what was planned came true. The same level of creative challenge and excitement I experienced while working on the Copper House and Art House. It was the time when I was rethinking the use of brick and ways it could interplay with metal. I was fascinated by how earth and clay transform into brick and the use of brick cladding on all kinds of surfaces, including along a curved wall. I like the idea of giving a whole building a sculptural form. These contemplations were initiated by my visits to the ancient Russian monasteries in such regions as Solovki or Pskov. And also, Kensington in London and Boronia in Italy. It was a new direction after a more decorative approach in my earlier Copper House. The Art House became a new point of reference for me, there was more substance. I would even compare it to an organism, something alive, a living creature. Every time I pass by I imagine the building as a living thing.

VB: This theme of a living thing is also expressed in your House on Mosfilmovskaya. It is exactly the reason for its slight turn that recalls a living creature moving while turning back.

SS: Absolutely. At the time, I was preoccupied with the idea of creating a fresh composition for high-rise buildings that would differ from the established typology. I didn’t want simply to place another tower.

I came up with a composition of two buildings of different heights coming out of a base carried by multiple legs that would seem as if they were moving. It was important to create a sensation of a sort of inner life, orthomorphism, movement, tension, relaxation, and so on. During the design stage I was trying to feel this building and literally was communicating with it as if it were alive. I like the idea of humanizing architecture quite literally, meaning forging an image, originating of strange metamorphoses. It is important to me. The plasticity of a façade and silhouette are key tools of architecture. This is the language that I used while working on such of my projects as Danilovsky Fort and Burdenko Street complexes. I can say that I achieved a certain satisfaction in this direction and now I am searching for new ways of expressing my ideas, something I haven’t done before.

Today, I am attracted to simplicity and wholeness. I want to realize something quite clean and elegant. I am currently working on such project, three towers on Krasnopresnenskaya Embankment near Moscow City. All towers reach different heights, but they are tied together by common simplicity of their forms, texture, and unifying compositional rhythm. They are airy, transparent, and each tower features 100-foot ceiling at the ground floor hallways.

VB: Where do you derive your ideas? I read that you look through many publications.

SS: I think the process of acquiring architectural mastery can be compared to learning of a foreign language. To speak fluently in any language, you must have an extensive vocabulary and understand how these words interact with each other. The same is true in architecture.

VB: What words would you say describe your architecture most accurately?

SS: Reason and feeling. But can words describe architecture?

VB: Your choice of words tells me how you think about your work and what are your priorities. Do you have doubts? Do you have a fear that something may not be achieved?

SS: No. Never. I am not afraid. I know that everything will work out. Sometimes, it may take many tries, but I am completely sure about myself from the outset. I will find a good solution. I treat every project very personally, sincerely, and I immerse very deeply into the design process. I must find my own solution. Once I find it I don’t hesitate. From this moment it will be precisely as I want it to be. I know, I want to, and I can. I think it is this harmonic feeling that brings professional satisfaction. Most of what I do is dictated by this phrase – “I want to.”

VB: But that’s not what you would tell your client, right?

SS: Of course, I will! Sure, we may argue. But I always try to convince my client, city officials, contractor, even my own staff. If I am not convincing I fight without any fear of losing the commission. I care about the result.