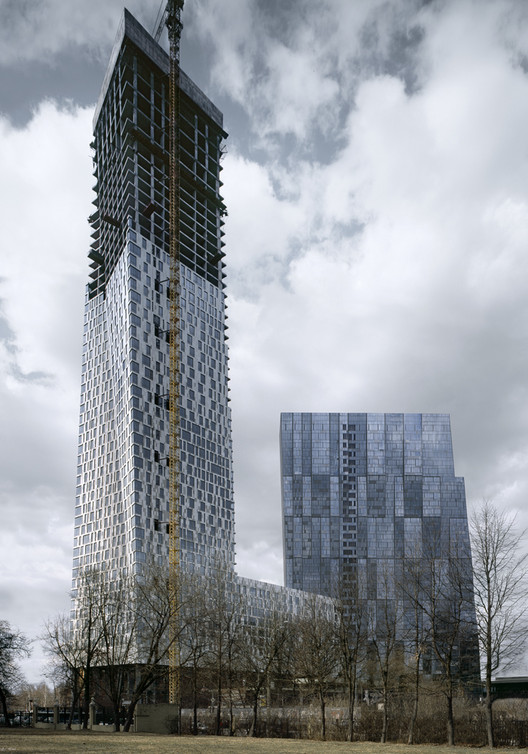 Text description provided by the architects. Multifunctional complex representational features are the main tower 214-meters high and chip-like house 130-meters high. Both high-rise buildings are connected by third structure consisting of two parallel 8 storey units so that an atrium is formed in between them, with well lit inner space (in spite of giants standing nearby). The whole composition is positioned on three-level stylobate which contains underground parking lots, trade and sports rooms, well accomplished roof with dwelling and offices entrance groups, sport grounds and R&R areas, separate units for trade center and offices. The connecting low storey houses and the main tower are lifted up for 17-meters supported by almost chaotically tilted columns high made of coal black cast-in-situ concrete.

To stress the size of the main tower the 8-shade colored façade “alpolic” panels were used, smoothly changing from as brightly white as Carrara marble at the top to dark shades of limestone at the bottom. The “alpolic” panels (Japan) are the finishing element of suspended façade system assembled in modules, making a sure impression of the building faced with natural stone material. Rhombus shaped plan of each typical floor is slightly but intentionally turned counterclockwise with each level from bottom to top thus giving the main tower a twisted shape, when obtuse angle on the first floor changes itself to a sharp one at the very top, and vice versa. The panel-shaped high-rise building is very sculptural as well because its facades are made of three different types of glass while its monotony gets subdued by the intertwined basket-like vertical stripes.

Trade&Entertainment centre contains large self-service store below “zero” level plus shopping galleries and night club with restaurant in the 2-storey prism-like structure above stylobate roof. The roof of the Trade centre itself is given to the summer café with 80 seats.

Office unit, “the last-minute” addition to the composition idea consists of two parts of different height, both united with common atrium space on the ground level.

The Dwelling complex is located very closely to the wide open spaces of Poklonnaya Gora and the valley of the Setun River. Its composition was dictated by existing urban situation and originally consisted of two symmetrical pairs slightly differing from each other. The first part of this pair is nearing its completion now. It was conceived and constructed as general urban accent just for the purpose of versatile apprehension from well known observation points in Moscow. The place for construction site was chosen on the top break point of the longitudinal profile of the famous street in the city. The spot of the complex itself managed to occupy only vacant spaces within city blocks and not a single existing house in the area had been touched. The skyscraper`s architecture responds to the scarceness of buildings in the district, famous for the rich greenery of Moscow State University campus and vast territories of well-known “Mosfilm” factory of movies. The main tower serves as a landmark of the main entrance to it.

Principle of segregation between private and public was taken as the basic one for programming the Complex. Thus the separate and independent coexistence of inhabitants, visitors and office workers was ensured. At the same time autonomous and controlled access to each and every function in the Complex was thoroughly planned without losing efficiency in engineering service and technology. 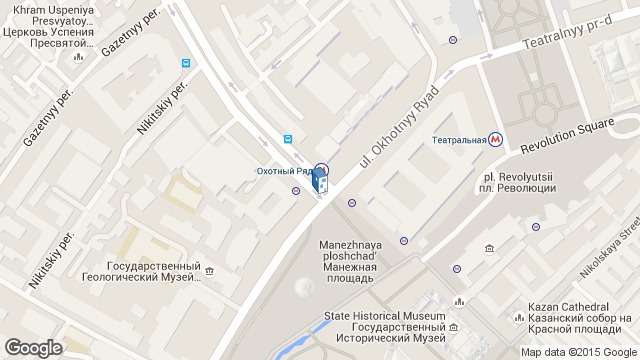