Save
6 of Russia's Best 21st Century Projects
Share
Or
Copy

Given the country's rich architectural history spanning almost the entirety of the 20th century, you'd be forgiven for thinking that the fall of Russian Communism in the early 1990s might have sparked an exciting new era in design. That promise hasn't exactly been fulfilled, but as The Calvert Journal reports, a few promising recent projects are hinting at a Russian Renaissance.

The last twenty years of architecture has added little but bog-standard steel-and-glass office blocks to the limited palate of the Russian cityscape — the usual glinting onion domes, pompous Stalinist neoclassicism and crumbling tower blocks. But lately some architects have dared to differ and turned bold blueprints into bricks and mortar. Read on after the break for our pick of the best Russian buildings of the last decade. 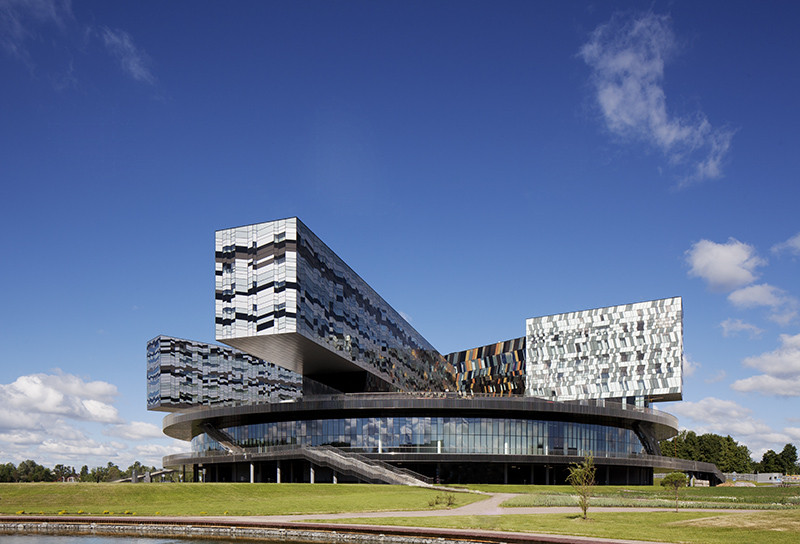 Drawing inspiration from works of Russian avant-garde artist Kazimir Malevich, British architect David Adjaye designed a building in 2010 that is reflective of both the rebellious nature of Russian art and the innovative education agenda of the new private business school, which forms part of a plan to turn the sleepy village of Skolkovo outside Moscow into a Russian Silicon Valley.

These prefabricated wooden cottages elevated on steel legs at the Pirogovo Luxury Resort outside Moscow seem to recall the houses of Japanese samurai. Their unique shape is accentuated by the striking red colour.

The 40,000-seater stadium, held the opening and closing ceremonies of the 2014 Sochi Winter Olympics. Its massive, eccentric arches give the impression of a gigantic sea creature thrown from the depths of Black Sea and anchored between the mountains, sky and water.

An award-winning complex of towers designed by architect Sergey Skuratov. This building was almost demolished before it was completed when former Moscow mayor Yuri Luzhkov decided that it “breached the height limit” in a city filled with skyscrapers. Luckily the building outlived the mayor and is now one of the most sustainable residential complexes in Moscow.

The new modern art extension of the State Hermitage Museum, this magnificent development not only houses the twentieth-century treasures of Russia’s biggest museum, but also hosts large-scale shows by leading contemporary artists from around the world. The building’s main atrium recalls the opulent Jordan Staircase in the neighbouring Winter Palace and functions as a new concert and exhibition space.

This minimalist residential building flirts with motifs from Moscow constructivist masterpiece Melnikov House, but remains a completely modern building that integrates harmoniously into a residential area in central Moscow.

A version of this article originally appeared in The Calvert Journal, a guide to creative Russia, as part of their fortnightly newsletter, "The Shortlist."