The New York City Public Design Commission and Mayor Bill de Blasio have announced the 11 projects selected as winners of their 2018 Awards for Excellence in Design. Established in 1983, the award has been bestowed annually to projects from the city’s five boroughs that “exemplify how innovative and thoughtful design can provide New Yorkers with the best possible public spaces and services and engender a sense of civic pride.”

The 2018 awards recognized projects which responded to the de Blasio Administration’s commitment to providing an “equitable, resilient, and diverse city for all New Yorkers.” All five New York boroughs feature in the awards, with schemes encompassing education, culture, art, and recreation. 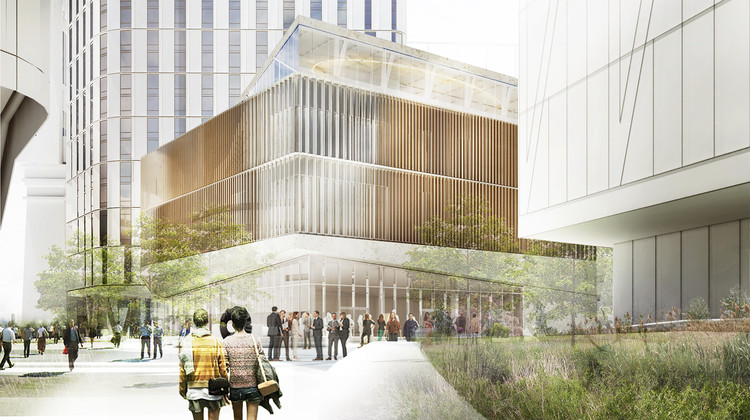 Below, we round up the winning schemes, complete with a short description from the New York City Public Design Commission.

Saul Becker’s painting for the new Snug Harbor Cultural Center Music Hall depicts an 18th-century sailing ship run aground and transformed by nature with mature trees growing out of its hull. The artwork is an apt representation of a Staten Island community founded in a maritime tradition that is finding new ground and fostering growth.

The rehabilitation of the Brownsville Recreation Center will transform an outdated 1950s structure into a vital neighborhood resource with renovated fitness areas, a pool, and multi-purpose classrooms. The revitalized center will provide the Brownsville community with enhanced programming and recreation for years to come.

Designed by Calvert Vaux in 1874, the Concert Grove Pavilion is an open-air shelter comprising eight cast iron columns supporting a decorative metal and wood roof with a stained-glass skylight. The restoration of the pavilion will repair water damage, reconstruct missing elements, and repaint the structure based on historic images, bringing new life to this charming historic gathering space.

Inspired by the New York Public Library’s collection of 19th- and early 20th-century illustrations, artist Shawn Smith chose 20 local songbirds for his artwork in the new Westchester Square Branch Library. Each of the 100 sculptures will be constructed from individually painted pieces of basswood, resulting in a diverse mix of bright patterns, shapes, and colors.

As part of the Community Parks Initiative, the reconstruction of this park will benefit the previously underserved neighborhood of Mott Haven. With flexible spaces for a variety of uses, the park will become a nexus of community engagement and recreation for all age groups.

The renovation of this 1959 library will restore and renew a modernist structure with energy-efficient systems and resilient materials, transforming this civic structure into a light-filled, accessible and active facility that is visually connected to the community it serves.

The rehabilitation of the 1964 World’s Fair New York State Pavilion will provide stabilization, restored lighting, and maintenance access that will lay the foundation for future preservation and potential adaptive reuse of these iconic structures.

The prototypical plaza kiosks will provide a cost effective source of revenue for the continued maintenance of city plazas. The versatile design is aesthetically harmonious with the city’s street furnishings and will activate public spaces with amenities and lighting.

The reconstruction of the Reflecting Pool is the first phase of a larger project to adaptively repurpose a series of fountains from the 1964 World’s Fair. The design references the original use of the space as a water feature yet transforms the site into an enjoyable and sustainable focal point in the park.

The Studio Museum in Harlem / Adjaye Associates and Cooper Robertson

The Studio Museum’s new home will establish a distinguished architectural presence that celebrates the legacy of this critical cultural resource. Enlarged exhibition and program spaces will enhance the organization’s programming for Harlem residents and visitors from around the world.

As the northwest gateway to the Cornell Tech Campus, the education center and hotel will become an active and dynamic campus hub. The two buildings share a transparent podium that will house a mix of public and academic spaces, enlivening the exterior courtyard and campus and welcoming a diverse range of visitors from New York City and abroad.