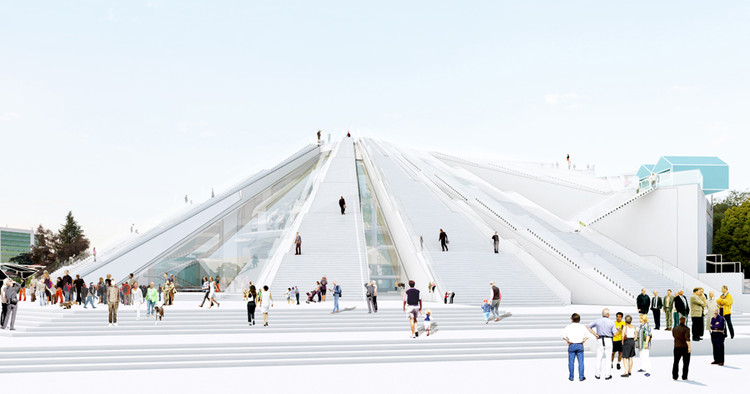 Though in the past, there were plans to transform this monumental building into a national theatre, this never materialized which left this fantastic building in ruin for more than a decade. The Pyramid of Tirana will rise again by becoming a new center of technology and learning for young people.
-Winy Maas, Co-Founder, MVRDV

The MVRDV design will open up the ground level on all sides, addressing the building’s existing closed and inaccessible atmosphere while filling the dark atrium with light and activity. The vast ceiling height is to exploited with the addition of trees and other greenery to fill the atrium void. Meanwhile, existing concrete beams and additional pop-up structures such as pavilions and platforms will form the backdrop to temporary events.

It is a symbol for many Albanians. For the older generation, it is a memory to the cultural events during communist times, for the recent generation it became the place to celebrate the new era. They will use it as a hangout, as a place to glide of, and for concerts and gatherings. We will open it up to its surroundings as a structure in the park, that can be populated by people, trees, and containers for co-working. We will make the beams accessible and safe so that we can all climb to the top and celebrate the structure, with views of the city of Tirana. We create an inhabited monument.
-Winy Maas, Co-Founder, MVRDV

Fundamental to MDRDV’s approach was to respect the current informal use of the structure by young people and strengthen this appeal by inviting all citizens to share this function. When completed, the new center will host a learning program where teenagers lead their own education “at the intersection of technology and design.”

Designed as a commission of the Municipality of Tirana, the scheme is set to be completed in June 2019. 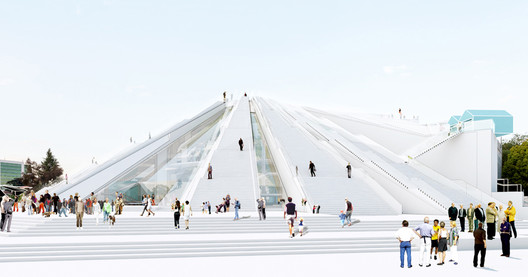