Designed by Henning Larsen and MSR Design, the New Public Service Building for the city of Minneapolis aims to consolidate several departments, currently found across multiple different sites, into one unified building. The scheme promotes the health and well-being of its 1,300 employees through maximizing daylight and green space throughout, integrating a significantly sustainable remit within the 385,000 square foot, 11 story proposal. Located diagonally across from the existing city hall, Henning Larsen brings a “knowledge-based Scandinavian design approach” to the high-performance office space, hoping to set a “new architectural agenda in North America." 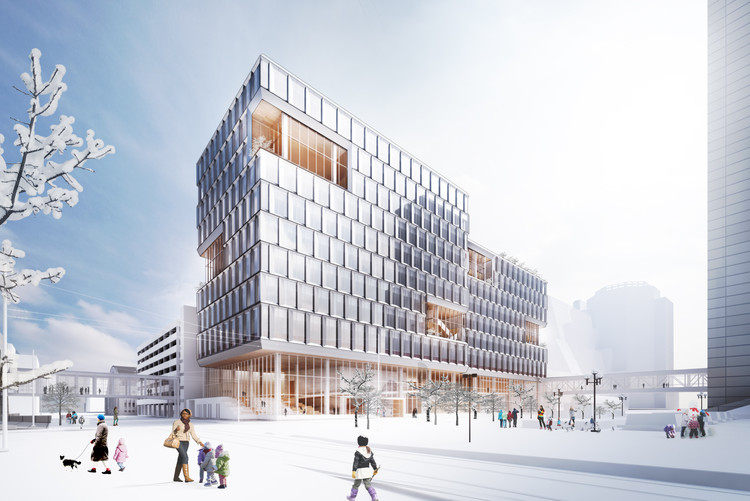 Elevating the main building and allowing for an open office on its first two levels, a transparent relationship is formed between the City and the people, punctuated in the creation of a large public space - described by the architects as 'an urban gesture.' Louis Becker, Henning Larsen’s Design Principal, stated that “it is our hope that this building will foster openness – literally and figuratively – in the meeting between citizens and public servants – by exposing administrative functions and offering easy, equal access to everyone, regardless of age, gender and social background."

For the City of Minneapolis, this project is an evolution that builds upon the City’s commitment to putting people first. Our process has been centered around this core value by giving a voice to user groups and stakeholders, each fundamentally driven to providing excellence in public service.
- Mike McElderry, Project and Managing Director of Henning Larsen’s NYC office.

With offices across six different countries, the New Public Service Building will be Henning Larsen’s fifth project in design or under construction in North America. It is due to for completion in the fall of 2020 and is currently pursuing Fitwell and LEED v4 Gold certification.

Henning Larsen Architects has revealed plans for a £400 million development that will transform the waterfront of Belfast. At 16 acres, the master plan constitutes the Northern Irish capital's largest single ground-up development in recent history.