Landmarks Illinois has released new images of a proposed radical extension to the James R, Thompson Center in Chicago. The images seek to portray the building’s versatility to be privately redeveloped as a mixed-use hub, featuring an eye-catching “super tower” at the southwest corner of the site, as proposed by the scheme’s original architect Helmut Jahn.

The new images follow on from a previous story we covered last year, detailing a 110-story tower proposed by Jahn in response to local plans to demolish the postmodern building. The latest images underlie a similar goal of demonstrating the potential for the Thompson Center to be protected and expanded, in response to its listing on the Most Endangered Historic Places in Illinois in 2017 and 2018. The Postmodernist piece lies in a precarious situation, with an administrative interest in selling the building and replacing it a high-rise development. 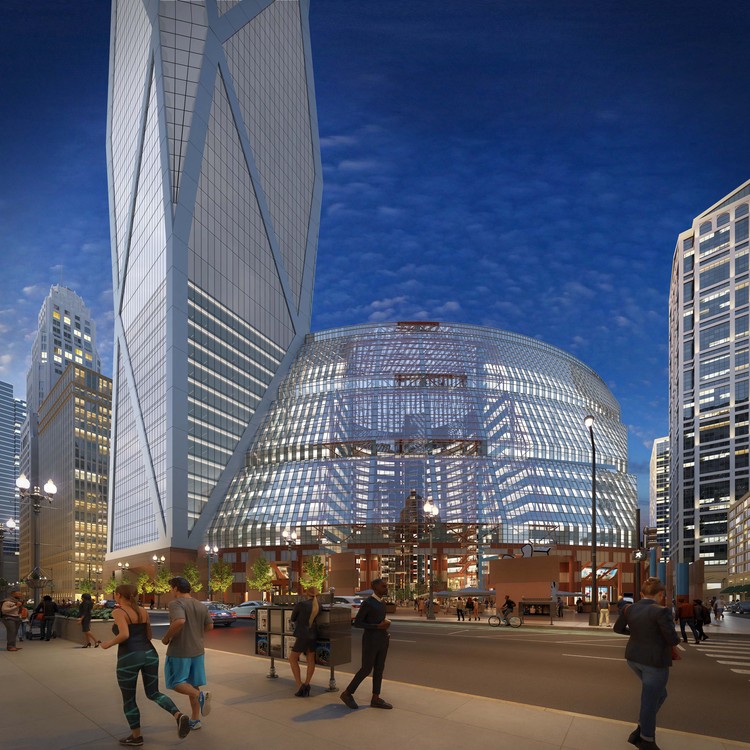 The updated renderings seek to demonstrate the possibility of maximizing the site’s zoning and revenue potential without demolishing the Thompson Center. The existing building would act as a gateway to the new scheme, maintaining a status as one of Chicago’s greatest indoor public spaces; “an open-air, urban space with shops, restaurants, and activities that would make the complex a revitalized and exciting destination.” Meanwhile, the strategic separation of existing spaces could create large office floors capable of accommodating technology or corporate companies.

The southwest corner of the site remains the proposed location of a new tower, with minimal impact on the existing building’s atrium space. At approximately 13,000 square feet, the mixed-use tower would contain a hotel on the lower floors, and residential on the upper floors. On the second level of the existing center, a connection would be formed with the tower’s hotel lobby.

The proposal argues that “repurposing, not demolishing, Thompson Center makes the most sense from an economic, environmental and architectural standpoint,” avoiding the minimal $15 million demolition price tag while still redeveloping the site in a “dramatic and exciting way.” 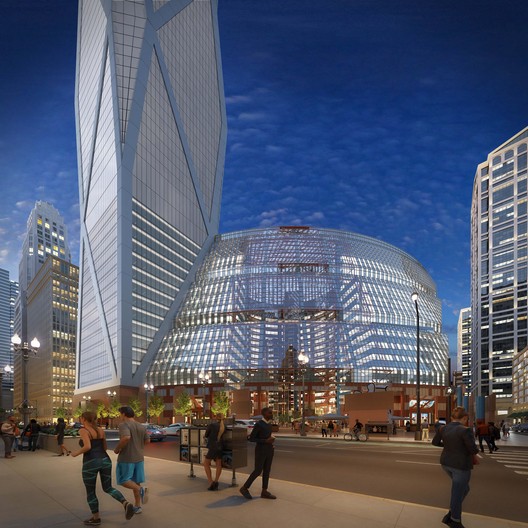