Save
Documentary Hopes to Save Chicago's "Starship," the Thompson Center, from Demolition
Share
Or
Copy

In the midst of the tall, rectilinear skyscrapers which make up downtown Chicago appears a short, sloped glass curtain wall, topped by a protruding truncated cylinder structure: Helmut Jahn’s Thompson Center. Opened in 1985, the building was to be home for a variety of agencies of the State of Illinois, and its design was a play off of the traditional American statehouse, updated with glass walls symbolizing government transparency and an immense atrium evoking the atrium spaces found in most United States’ statehouses. The interior spaces, however, stirred further contention with the public. Unconventional red, blue, and white paints coat the interior elements—a design choice many believed to be provocative and even jarring.

When the building opened in 1985, the all-glass curtain wall would overheat the interior and cause intense, terrible glares onto the workspaces inside. The design shocked critics and Chicagoans alike at the time, creating controversy for its unusual form, exuberant atrium, and for the teething problems which made the building a constant focus for negative press.

As the years passed, Chicago gradually became accustomed to the Thompson’s Center’s unique presence. Though still polarizing, for many people their perception shifted from the building being a foreign, “starship”-like object to a cause for pride, a celebration of Chicago as the architecture capital of the world.

However, the Thompson Center is in trouble. Upkeep and maintenance of the building have slowly diminished, and the building now requires an estimated $327 million of repairs due to its continued neglect. With paint peeling, marble crumbling, and a valuable real-estate location, many—including both Illinois Governor Bruce Rauner and Chicago Mayor Rahm Emanuel, who are both intent upon selling the building—are ready to see the demolition of this Chicago architectural landmark.

Nathan Eddy captures the story of the Thompson Center and the fight for its refurbishment in his short documentary, Starship Chicago. The 16-minute film premiered at the Architecture Film Festival Rotterdam and speaks with both Helmut Jahn and former Illinois Governor James R Thompson himself, as well as prominent Chicago architects, critics, and preservationists to discuss their opinions on the past and future of the iconic building.

The crisis facing the Thompson center is not uncommon in the architectural world. The once-striking, provocative statement has lost much of its initial splendor, but does that mean it should be torn down? The building in itself remains intact and thus there exists an opportunity to give the building a new life.

The current threat to the Thompson center is a threat almost every building of architectural significance has gone through.
– Tim Samuelson, Cultural Historian, City of Chicago

The Thompson Center represents a unique moment in time and a contrast to the rectilinear skyscrapers characteristic of Chicago. The interior celebrates structure with bold colors and space with an immense atrium. At a crucial moment in the building's life, Starship Chicago provides the viewer with a glimpse into the dynamic, rich history of the building and insight into its current situation. 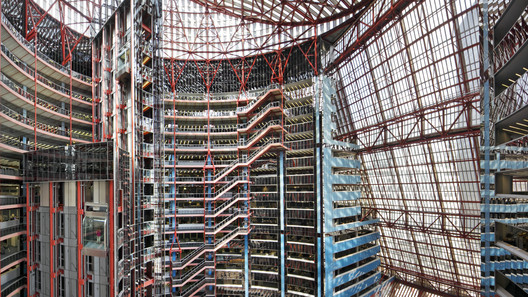