Foster + Partners has released a video depicting their vision for a future high-speed transportation infrastructure, taking advantage of recent advances in hyperloop technology. Designed for DP World Cargospeed, a collaboration between cargo giant DP World and Virgin Hyperloop One, Foster + Partners’ vision for an infrastructural network seeks to create a new ecosystem where urban centers and rural landscapes are interconnected, as are humans and nature.

Foster + Partners’ concept is in response to society’s shift towards an instant “on-demand” lifestyle where goods, services, and products are expected to be sent and received at an unprecedently rapid rate. The DP World Cargospeed system seeks to move freight “quickly, safely, on-demand, and connects seamlessly with existing modes of transportation.” While much focus has been given to the passenger potential of Hyperloop One, utilizing the same network for freight creates the opportunity for goods to move quickly and effectively to the hearts of cities, within the context of an autonomous network.

Powered by renewable energy, the network is envisioned as being safe and clean, with no carbon emissions. Cargo contained in the Hyperloop pod would be accelerated through electric propulsion in a low-pressure tube, hurtling at aircraft speeds by means of magnetic levitation. The network would be fully enclosed and autonomous, eliminating hazards associated with weather, climate, and pilot error. The project is expected to take its first steps in Dubai, where Hyperloop Transportation Technologies (HTT) and Virgin are both striving to dominate the future industry.

We are pleased to be part of the team of DP World and Virgin Hyperloop One to pioneer this concept of a green and renewable system of transport. The movement of people and goods is part of the vital infrastructure that binds all our cities together – and cities are the future of our society. As Hyperloop looks to reinvent urban transport and logistics, the city of the future is closer than we think. It is important we develop an integrated sustainable vision of infrastructure that will enable us to evolve and adapt our existing cities, and design new ones that will be in harmony with nature and our precious planet.
-Norman Foster, Founder and Executive Chairman, Foster + Partners

Hyperloop Transportation Technologies (HyperloopTT) has released details of their plan to create the world's first commercial Hyperloop system in Abu Dhabi. Situated on the border between Abu Dhabi and Dubai, in close proximity to both the Al Maktoum International Airport and World Expo 2020 site, the HyperloopTT will begin with the construction of six miles (ten kilometers) of infrastructure, with future development potentially creating a commercial Hyperloop network across the United Arab Emirates and beyond. 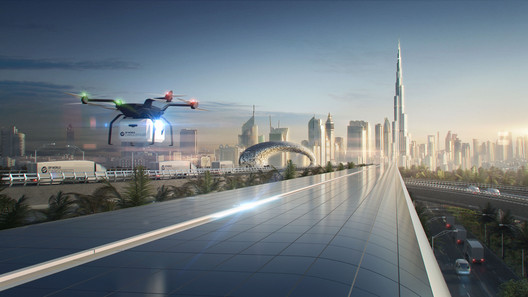