In architecture we are so caught up in creating something new, we often forget about what happens at the end of a building’s life cycle—the unfortunate, inevitable demolition. We may want our buildings to be timeless and live on forever, but the harsh reality is that they do not, so where is all the waste expected to go?

As with most non-recyclable waste, it ends up in the landfill and, as the land required for landfill becomes an increasingly scarce resource, we must find an alternative solution. Each year in the UK alone, 70–105 million tonnes of waste is created from demolishing buildings, and only 20% of that is biodegradable according to a study by Cardiff University. With clever design and a better awareness of the biodegradable materials available in construction, it’s up to us as architects to make the right decisions for the entirety of a building’s lifetime.

Cork is something of a superfood of construction materials, so much so that we've written a whole feature on it. The harvesting of cork is a completely renewable process that causes no harm to the tree and naturally regrows after ten years. It also boasts many desirable properties as a fire retardant, acoustic insulator and is extremely waterproof. Its adaptive qualities have seen it being used both for internal and external purposes.

Perhaps one of the biggest architectural crazes within the last few years, countless bamboo projects have been shared across the internet thanks to the material's aesthetic qualities, but more so for its sustainable credentials. If you needed a little reminder about why it has become so popular, bamboo can grow up to four feet a day, regrows after harvesting and is two to three times stronger than steel.

Recently developed by students Carolyn Tam, Hamza Oza, Matteo Maccario and Saki Maruyama at the Imperial College London, Finite is a composite material comparable to concrete that uses abundant desert sand rather than the fine white sand usually used in construction (and which is now running out). It makes for a biodegradable material that at the same time is saving the world from the next sustainability crisis. Unlike concrete that can’t biodegrade, Finite’s organic binders allow it not only to be left to decompose but it can also be collected and reused for multiple life-cycles, reducing material consumption.

Surprisingly, the floor covering is a lot more eco-friendly than it might appear. Not to be confused with vinyl that contains a synthetic mix of chlorinated petrochemicals, linoleum is made entirely from natural materials—linseed oil, natural resin, ground cork dust, wood flour, and powdered limestone—resulting in a floor choice that is both biodegradable and can be incinerated to provide a relatively clean source of energy.

As plastic accumulates in our oceans and rivers, it has become imperative that we both reduce our consumption and find cleaner, biodegradable alternatives. Bioplastics break down much faster than synthetic plastic—at the same rate as paper does—and produces biomass. One of the main ingredients used is a soy-based adhesive that helps to reduce carbon dioxide emissions and the use of the carcinogenic pollutant formaldehyde, while also requiring significantly lower temperatures during production. Although so far soy bioplastics have been limited to disposable food containers and bin bags, with more research, there is certainly potential for biodegradable plastics to be seen in the future of construction.

As mentioned above, formaldehyde is a controversial material that has raised many questions over the years regarding its effects on both health and the environment. As MDF’s primary bonding adhesive uses the chemical, it cannot be recycled and the huge amount of MDF used in shop displays and furniture ends up in either landfill or the incinerator. To tackle the problem, new forms of medium density fibreboard have been studied by the University of Leicester that substitute the formaldehyde with a resin derived from potato starch.

It may not be a complete revelation to you, but timber is of course biodegradable and a renewable material as long as it is sourced sustainably. However, when used in construction, the timber treatment must be factored in, as much of it can end up as "special waste" that requires extra treatment before heading to landfill—an unnecessary process that can be prevented.

Following recent projects that have explored the wonders of this curious material, mycelium has risen in popularity, although its use is so far still limited to temporary pavilions or installations. Mycelium is the vegetative part of the fungus, made up of hundreds of interwoven fibers produced by the spores which makes it an incredibly strong material when dried. If combined with farm waste in molds, the fungus culture forms organic bricks that can be used in construction that afterward decompose and return to the carbon cycle.

8 Common Materials You May Not Have Realized Are Sustainable

Sustainability. A word that, for many of us, has been driven into our minds from the very start of our careers as architects. We have a responsibility to the planet and future generations to design buildings that are socially conscious-from solar panels to triple-glazed windows, we have tried it all. 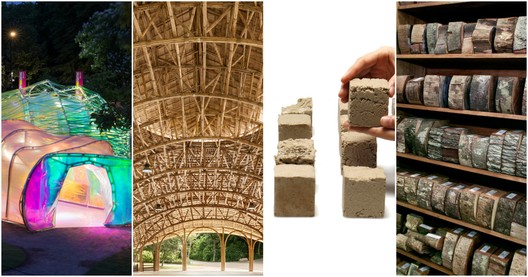