British architect, historian, critic and educator Kenneth Frampton has been announced as this year’s recipient of the Golden Lion for Lifetime Achievement at the 2018 Venice Biennale. The decision was made by the Board of The Venice Biennale chaired by Paolo Baratta, upon recommendation from the Biennale’s curators, Yvonne Farrell and Shelley McNamara of Grafton Architects.

Having studied at the Architectural Association in London, Frampton has taught at the Graduate School of Architecture, Planning, and Preservation at Columbia University, New York since 1972. He has also lectured at several leading institutions, including ETH Zurich, the Royal College of Art in London, and the Berlage Institute in Amsterdam. Perhaps his most influential work, “Modern Architecture: A Critical History,” was described by Biennale President Paulo Baratta as a book which “no student of the faculties of architecture is unfamiliar with.”

Frampton’s contribution to architectural literature extends beyond “Modern Architecture, A Critical History.” In “Towards a Critical Regionalism” he argues for architects to revalue context, place, and culture. In “Studies on Tectonic Culture” he highlights the connection between the languages of construction and architecture. In “A Genealogy of Modern Architecture: Comparative Critical Analysis of Built Form,” he captures the inner workings of architectural projects, making them accessible to a wider audience.

Through his work, Kenneth Frampton occupies a position of extraordinary insight and intelligence combined with a unique sense of integrity. He stands out as the voice of truth in the promotion of key values of architecture and its role in society. His humanistic philosophy in relation to architecture is embedded in his writing and he has consistently argued for this humanistic component throughout all the various ‘movements’ and trends often misguided in architecture in the 20th and 21st century.
-Yvonne Farrell and Shelley McNamara, Curators, 2018 Venice Biennale

The Golden Lion for Lifetime Achievement will be awarded to Frampton on May 26th, 2018 during the inauguration of the Venice Biennale.

News via: The Venice Biennale

The Board of Directors of La Biennale di Venezia, upon recommendation from Alejandro Aravena, have announced the Brazilian Pritzker Prize-winning architect Paulo Mendes da Rocha as the recipient of the Golden Lion for Lifetime Achievement of the 15th International Architecture Exhibition, Reporting From the Front. 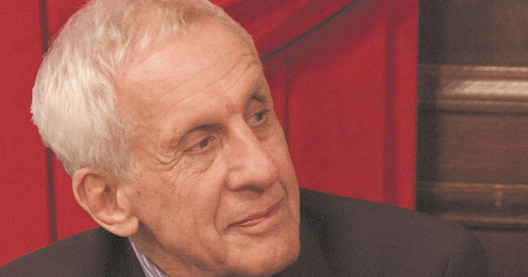