Foster + Partner’s Musée de la Romanité Narbonne (Roman Museum of Narbonne) has moved closer to completion, with the scheme's building envelope now fully constructed. The museum seeks to become one of the most significant cultural attractions in the Southern French region, hosting more than 1000 Roman artifacts. The scheme’s progress was celebrated at a topping out ceremony on 30th January 2018, with the installation of VELUX Modular Skylights marking the completion of the building envelope.

Once a major Roman port, the city of Narbonne has amassed an abundance of ancient buildings, relics, and archaeological sites. The Foster + Partners scheme, designed in collaboration with museum specialist Studio Adrien Gardere, centers on the prime exhibit for the museum: a collection of over 1000 Roman funerary stones recovered from the city’s medieval walls in the 19th century. The stones are to be placed at the heart of a simple rectilinear structure, separating the public galleries from private research spaces. 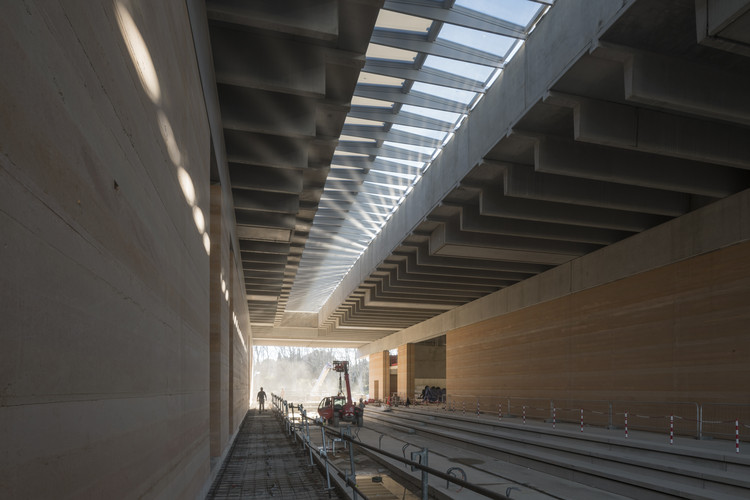 The single-story museum features a precast concrete roof canopy inspired by Roman building techniques, providing thermal mass and contributing towards a considered environmental strategy. The canopy is supported by load-bearing SIREWALLs (Structural Insulated Rammed Earth) with a terracotta hue to reflect the natural earth of the region. While many exhibits need protection from sunlight, communal and recreational spaces within the museum are bathed in natural light from 150 skylight modules above.

With the completion of the building’s envelope, we can see the richness of the building for the first time, which is immensely exciting for everyone involved. The museum is not only an important cultural institution for the region, but it also plays a vital role in the regeneration of this part of the city. We are grateful for the support and vision of the Région Occitanie / Pyrénées- Méditerranée and the City of Narbonne.
-Spencer de Grey, Head of Design, Foster + Partners

Further north from the museum, Foster + Partners has created a masterplan for a public square to enhance the new cultural quarter. Named NARBO VIA, the scheme seeks to form a new landmark for the city, with gardens and landscaping taking inspiration from Roman courtyards. The scheme will feature an open-air amphitheater for events and displays, and a strengthened connection between the museum and adjacent Canal de la Robine via a new pedestrianized ramp.

The Musée de la Romanité Narbonne is scheduled to open in 2019. 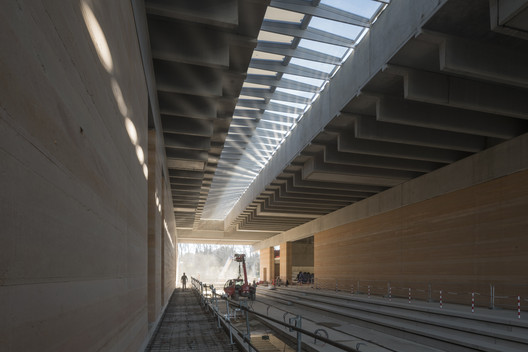