London-based Rogers Stirk Harbour + Partners has released the first images of their 1.4-million-square-foot (130,000-square-meter) commercial tower for Toronto, Canada. Having won an international competition for the design of “The HUB” in 2017, the RSHP scheme has progressed with the potential to become a dominant fixture on the Toronto skyline.

30 Bay Street has a unique and innovative structure which allows the building to hover above the Toronto Harbour Commission Building, creating a unique and harmonious relationship between the two buildings, and bringing a lively diversity to the downtown area.
– Graham Stirk, Senior Partner, RSHP

Located at 30 Bay Street in Toronto’s South Core, “The HUB” will feature column-free office space and the potential for multi-story atria, with an exterior driven by structural steelwork, transparency, and connectivity to the existing urban fabric.

I am delighted to be working with Oxford Properties on our first Canadian high rise in Toronto. The 30 Bay Street site provides an excellent opportunity to continue strengthening the urban linkage and public realm between the downtown core and the waterfront.
– Richard Paul, Partner, RSHP 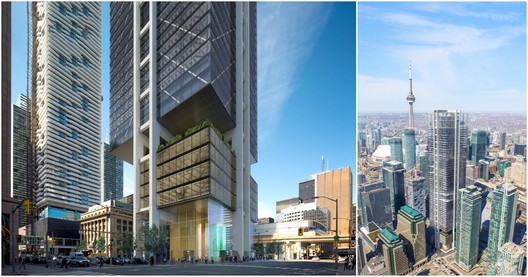