Save
Greek Pavilion at the 2018 Venice Biennale to Explore Utopian Visions of Learning
Presented by:

As part of our 2018 Venice Architecture Biennale coverage we present the proposal for the Greek Pavilion. Below, the participants describe their contribution in their own words.

Xristina Argyros and Ryan Neiheiser have been selected to curate the exhibition of the Greek Pavilion in the 16th International Architecture Exhibition – La Biennale di Venezia - under the general theme “Freespace,” commissioned by Yvonne Farrell and Shelley McNamara. Entitled “The School of Athens,” the project will examine the architecture of the academic commons - from Plato’s Academy to contemporary university designs. The selection was made by The Greek Ministry of Environment and Energy and the Secretary-General of Spatial Planning and Urban Design, Eirini Klampatsea.

The curatorial duo re-imagines the Greek Pavilion as its own kind of learning “freespace,” adopting the architectural trope of the stepped landscape to create an active space of debate and exchange. Within this landscape, architectural models depicting academic common spaces from across history and around the world, both realized and unrealized, will create a field of architectural specimens that fills the pavilion in all directions.

The project recognizes that common spaces within the university - unprogrammed spaces for impromptu conversation, casual gossip, heated debate, pop-up lectures, networking, and informal teaching - are vital to the institution’s continued relevance and vibrancy, and deserves intelligent critique and update.

The School of Athens is an ambition; a utopian vision of a free, open, informal, and common space for learning. It is an in-between space. Neither inside nor outside, not quite a room, but also not simply a space for circulation.

Although we typically think of learning taking place in the classroom, educators and architects have recognized for thousands of years that learning also takes place in the space between; in the hallways, on the stairs, at the café, in the quad. Socrates taught in the Agora. Plato founded his Academy in the olive grove outside of Athens and often taught while walking. Medieval colleges were organized around a communal courtyard. 20th-century universities are filled with informal learning spaces often associated with circulation, and today there is a particular fascination with designing staircases, or stepped seating spaces, as the main architectural feature of an academic commons.

Our ambition is to both look back, and to scan across the current landscape of university architecture, to extract compelling and successful spaces that are “free” - democratic, unprogrammed, and common. 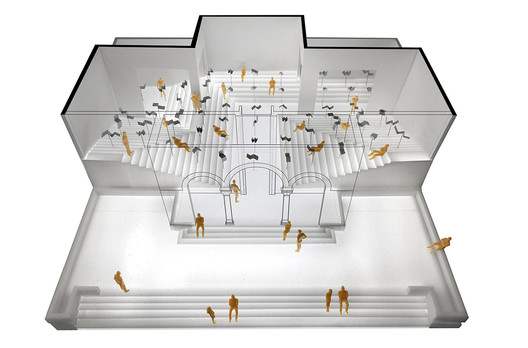