In an era defined by globalization, and ‘speed-driven economies,’ urban environments are becoming more entwined with airports, giving rise to an architectural phenomenon of the ‘Aerotropolis’ across the world. In Oslo, Norwegian firms Haptic Architects and Nordic Office of Architecture have aimed higher, seeking to design the world’s first energy-positive airport city for the Norwegian capital. 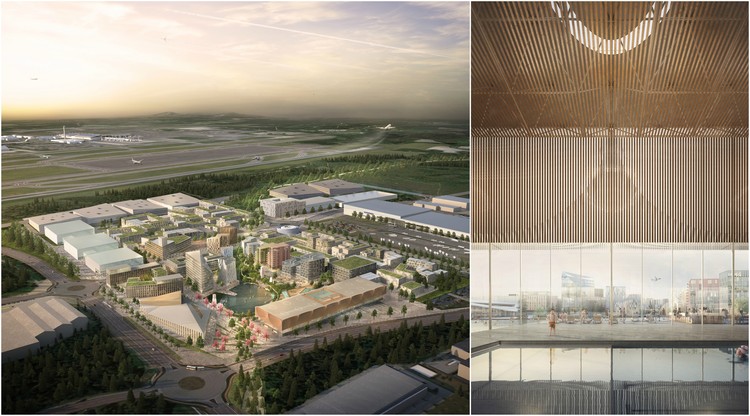 The 4 million-square-meter Oslo Airport City (OAC) masterplan embodies the Norwegian government’s ambition to move from an oil-based economy to one powered by renewable energy. Embracing low carbon features and green technologies, the Airport City will have the capacity to sell surplus energy to surrounding buildings. More than a city of present abilities, the scheme will serve as a test-bed for future technologies, including electric driverless cars, auto-lighting, smart waste, and perhaps most ambitiously, a fleet of electric aircraft.

Oslo Airport City will be a catalyst for high-value economic activity in Norway. We expect it to deliver long-term, highly skilled jobs creating science and technology-based products. As long-term city developers with focus on sustainable, innovative solutions, we believe the future of airport city development in Norway and Oslo is not a matter of if, but when! – Thor Thoeneie, Managing Director, Oslo Airport City

More than a playground for a technological age, OAC incorporates human-centred strategies for its predicted 40,000 population. Public parks, green spaces and leisure centres cater to Norway’s passion for sports and outdoor activities. A car-free city centre is proposed, with citizens never more than five minutes from public transport nodes.

This is a unique opportunity to design a new city from scratch. Using robust city planning strategies such as walkability, appropriate densities, active frontages and a car free city centre, combined with the latest developments in technology, we will be able to create a green, sustainable city of the future. – Tomas Stokke, Director, Haptic Architects

Construction of the Oslo Airport City is expected to begin in 2019, with the first buildings completed in 2022.

82 Text description provided by the architects. Designed by Oslo-based practice Nordic-Office of Architecture, the 115,000 sqm expansion to Oslo Airport sets new standards in sustainability. The competition-winning design, which uses snow as a coolant, has achieved the world's first BREEAM 'Excellent' sustainability rating for an airport building. 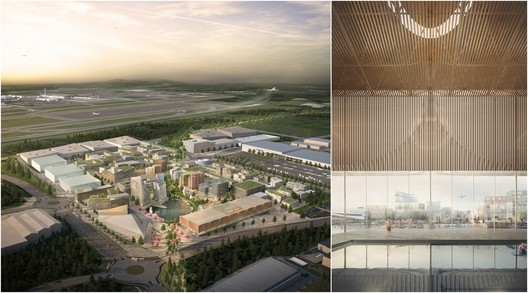