The gas station does not usually catch one’s fancy. It is a ubiquitous building, one built primarily for function instead of for pleasure or community. We see them all the time but barely give them a second glance unless the need arises – and then, we get our fuel, and we are out of the station in minutes.

With the smell of gasoline and the usual convenience store spread, these service stations do not exude any particular sense of wellness. Neither have their flat, perennial structures captured the imagination of architects – until now.

Reebok and Gensler are the first to catch on to the enormous potential of the common gas station. These buildings sit on prime real-estate all over the country, from highways to local streets. In their new collaborative project, “Get Pumped,” the global architecture firm and the fitness brand are coming up with a plan to re-do the gas station as we know it.

“We love to think about how the world can be healthier, improved, and more wellness-minded,” said Arlyn Vogelmann, a principal at Gensler. “So when we were redesigning Reebok’s headquarters and helping them move from a suburban location to downtown Boston, our two teams got to thinking, what are the way we can revitalize old gas stations to something useful for communities?”

Gas stations are an overlooked property. There are around 114,000 gas stations in America alone. When automobiles were introduced in America, filling stations naturally followed suit. But by 2030, Reebok and Gensler think that consumers may not need to refuel the same way, thanks to electric vehicles and self-driving cars. Instead of watching fuel stations fall to waste, the team thinks these structures open up new possibilities for sports architecture and for people to recharge instead.

Their plan is to re-do the gas station along three different scales.

The Network: In their future world, major interstate rest stops will serve as power grids. Travelers driving across the country on long journeys can now stop and generate energy. These places will offer spinning, boxing, Crossfit, Les Mils, and a running trail.

The Oasis: The larger gas stations in suburban areas will function as recharge zones. There can be a farm share meal or a farm to table eatery as well as yoga and meditation pods and herb gardens.

The Community Center: Small town gas stations will be places for the local community to get together to enhance their healthy life. Here, people can charge electric cars. In the auto repair shop, there will be nutrition classes. The minimart will offer local healthy food and pop-up trucks will offer Crossfit and Spin classes.

Vogelmann hopes that this adaptive re-use project can expand the architectural vocabulary of gas retail, "from the old route 66 version to the modern version, where it is streamlined - and some stations may even retain some vintage design elements."

Reebok and Gensler’s project is part of a wider trend towards urban and health innovations and new ways to think about promoting wellness. Another up-and-coming company in this field is Cityblock Health, a Sidewalk Labs-incubated company that is working to build “around-the-block” community health centers, starting in New York. When Vogelmann learnt about Cityblock Health, she gushed. “This is absolutely drawing upon the same inspiration. I love the idea of Cityblock. Easy, convenient, enriching the urban fabric at many different scales.”

“Cars are typically used for suburban commutes, so that is where we’re looking at with our project. The suburbs. But with Cityblock Health, that’s kind of the realm of the urban model. We are companions.”

We’re looking towards companies like Reebok and Gensler to use technology and design to come up with new ways for us to stay healthy, whether in the city, in the suburbs, or on the road. Vogelmann expressed that there has been lots of buzz over the project and that they would love to expand soon. 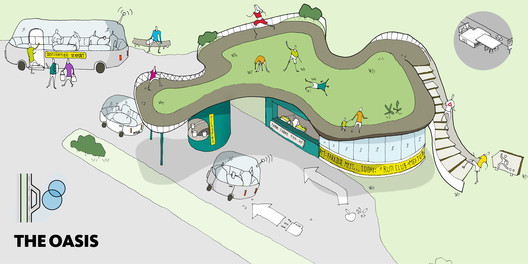