A new children’s urban playground has captured the attention and energy of children of all ages in the center of Valparaíso’s Cultural Park (Chile). The metallic structure is 40 meters long and has a colorful undulating path where children can run, jump, hide and slide.

La Serpentina is one of the public space projects designed by ELEMENTAL (Alejandro Aravena). It was built for Somos Choapa in Chile and is currently in Valparaíso as part of the XX Biennial of Architecture and Urbanism of Chile.

La Serpentina follows a similar design to the equipment at the Bicentenary Children’s Park (2012) in Santiago. La Serpentina is one of two interventions entered by Somos Choapa in the Biennial. The second project is a prototype with a series of touch screens installed in the main area of the Cultural Park of Valparaíso, accounting for over 100 concrete initiatives of the project.

From the architect: Somos Choapa is an alliance between the municipalities of Illapel, Salamanca, Los Vilos and Canela, together with the Minera Los Pelambres, whose objective is the sustainable development of the Province of Choapa.

This alliance builds a common agenda among communities, authorities and the private sector, having designed and implemented more than 100 concrete initiatives. The projects contribute to the development of these provinces through coordinated public and private investment, seeking to capitalize on the potential of a well designed built environment, which acts as an engine rather than a consequence of development. This is due to the need to replace the exclusive and vertical relationship between extractive industries and communities with a new inclusive and horizontal development paradigm.

This is due to the need to replace the exclusive and vertical relationship between extractive industries and communities with a new inclusive and horizontal development paradigm.

ELEMENTAL and TIRONI are responsible for the design and development of a portfolio of projects and programs capable of improving the quality of life of the communities in areas of public space and housing, irrigation and infrastructure, urban services, health, employment, productive diversification, road safety, education, and identity. In 2014, the project began in Illapel and then in Canela, which was aimed at identifying both the needs and desires of the people. Viva Salamanca began in 2015 and Somos Los Vilos was started in 2016, which saw the program implemented throughout the Province.

Here we present an overview of the initiatives underway at Somos Choapa. The training of community leaders; the rescue of the food heritage; the remediation of historical tailings; the construction of an artificial beach to recover tourism; and the development of socially integrated neighborhoods are just some of those initiatives.

La Serpentina, the children’s urban playground, which is making a temporary stopover in the gardens of the Valparaíso Cultural Park, will be part of one of the public space projects that will be built in the Province of Choapa. After the Biennial, the Serpentina will stay in Valparaíso until mid-December and then will be relocated to the Province of Choapa. The exhibition will continue on its way through the different municipalities of the Province, transforming into an itinerant exhibition of Somos Choapa. 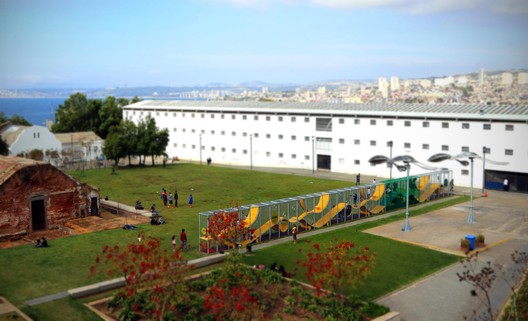