Save
The Results Are In: 2017 Was Another Record-Breaking Year for Skyscrapers
Share
Or
Copy

2017 was another banner year for skyscraper construction.

According to the 2017 Tall Building Year in Review, the annual web report from The Council on Tall Buildings and Urban Habitat (CTBUH), a record-breaking 144 buildings 200 meters tall (656 feet tall) or higher were completed in 2017, led by the 599-meter-tall Ping An Finance Center and 555-meter-tall Lotte World Tower. 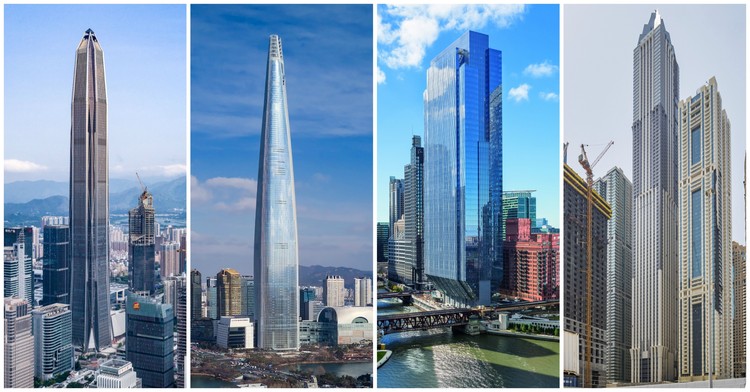 “The data from 2017 shows a continuation of the trend towards a greater global proliferation of skyscraper construction,” commented CTBUH Executive Director Antony Wood. “High-rise construction is no longer confined to a select few financial and business centers, but rather is becoming the accepted global model for densification as more than one million people on our planet urbanize each week. Thirteen cities saw their first 200-meter-plus high-rise completion in 2017, in addition to the 28 cities and eight countries that saw their tallest building completed this year.”

While geographic diversity was up, China more than retained its reign as the world leader in skyscraper construction, completing 53 percent of all new buildings over 200 meters. In fact, one Chinese city, Shenzhen, finished 12 of such buildings this year, more than any other country. The U.S. ranked second in the country list, with 10 new completed skyscrapers in 2017.

Other trends identified by the report include a shift in program type from all-office to mixed-used and residential towers. After representing 52 percent of all completions in 2016, all-office buildings constituted just 39 percent of this year’s total.

“It is tempting to speculate that we are now seeing the built results of a full-blown recovery from the 2008 economic crisis, as greater confidence in single-function programs sparks a resurgence in speculative residential development,” said Steve Watts, CTBUH Chairman. “Further, there’s been growing interest over the past several years in residential real-estate investment by absentee owners as a wealth management strategy. However, market dynamics vary greatly between regions, so it’s likely there are other factors to the story.”

According to the report, 2018 is projected to be another record breaking year, led by the anticipated completions of two 500-meter-plus buildings, the 597-meter-tall Goldin Finance 117 in Tianjin and the 529-meter-tall China Zun Tower in Beijing.

Find the whole online report, here and check out some of the most significant skyscrapers completed in 2017, below:

At 599 meters (1965 feet) tall, the Ping An Finance Center ranks as the world’s 4th tallest building. Perhaps its most innovative feature is its facade: Constructed from 1,700 tons of stainless steel, it allows the building to be unique resistant against corrosion from the city’s salty coastal atmosphere.

The newest skyscraper on the Chicago Riverfront, 150 North Riverside is notable for its sleek facade that culminates in a dramatically tapering base.

New York’s historic Temple Court Building at 5 Beekman Street (originally completed in 1883) has been revived as a luxury hotel, and now connects to a brand new residential tower capped with turrets inspired by those on the original building.

At 200 meters (656 feet) tall, Nairobi’s Britam Tower has become the tallest building in Kenya and the second tallest on the African continent (behind Johannesburg's Carlton Tower).

China’s largest inland city, Chongqing is now home to 35 buildings 200 meters or taller, including the Concord International Center, which just misses out on supertall status at 290 meters (951 feet) tall.

Another KPF-designed tower to complete this year, New York’s Madison Square Park Tower is notable for being the tallest building located in between Midtown and the Financial District, giving it a stand-out presence on the skyline.

Even in a city known for its supertall buildings, Marina 101 still stands out, becoming Dubai’s new second tallest building at 425 meters (1394 feet).

Located on the southern tip of the Kowloon Peninsula, the New World Centre took advantage of new zoning laws implemented following the relocation of the Hong Kong Airport to become the tallest building in Tsim Sha Tsui.

Located on the island of Hainan, Sanya is the southernmost city in China. The Rosewood Sanya offers a world class resort and conference center, with its tower becoming the city’s tallest building.

Israel’s new 3rd tallest building, the Shahar Tower is one of seven buildings of 150-meters-plus completed in Israel in 2017.

The second tallest building completed in Indonesia in 2017, the Telkom Landmark Tower is part of a massive mixed-use complex containing a wide range of program including retail, auditorium, restaurants, a fitness center, and a mosque.

Mexico’s new tallest tower tops out at 279 meters (916), offering panoramic views of the city of Monterrey and the Sierra Madre Oriental mountains.

The United States’ new tallest building west of the Mississippi River was also the 6th tallest completed worldwide in 2017, thanks to a large architectural spire rising from its peak. The Wilshire Grand was also notable for being the first skyscraper completed since the city’s 2014 decision to remove the stipulation that all buildings over 75 feet must feature a flat roof to serve as a helipad. 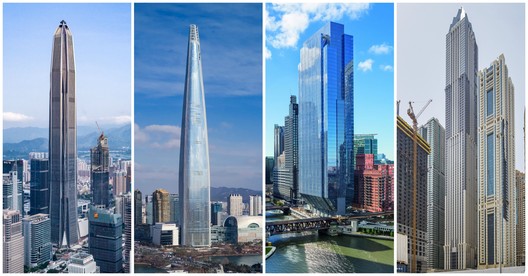