Save
Los Angeles' New Tallest Skyscraper, the Wilshire Grand, Opens to the Public
Share
Or
Copy

Los Angeles’ newest skyscraper, the Wilshire Grand Center, opened to the public this weekend, earning the crown of the United States’ tallest building west of the Mississippi River. Topping out at 1,100 feet, the building eclipses the nearby U.S. Bank Tower by about 82 feet, thanks to its glass crown and decorative spire that rise from above the 73rd floor.

Designed by AC Martin Partners, the structure also represents a major change in Los Angeles tall building design as the first skyscraper completed since the city’s 2014 decision to remove the stipulation that all buildings over 75 feet must feature a flat roof to serve as a helipad.

The 73-story building is home to an 889-room InterContinental Hotel, open office floors, sky restaurants on the 71st floor and a publicly accessible roof terrace and bar. Its signature feature, the LED-lit glass crown, was inspired by the curve of Half Dome, a distinctly-shaped granite formation found in California’s Yosemite National Park.

Check out some shots from the building’s opening below.

Learn more about the building here. 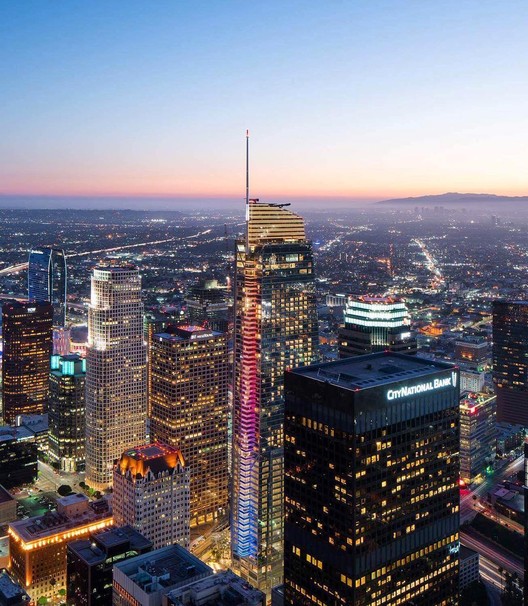