The Council on Tall Buildings and Urban Habitat (CTBUH) has announced the completion of the Ping An Finance Center in Shenzhen, China, according to CTBUH tall building criteria. At 599 meters (1965 feet), it is now officially the second tallest building in China and the fourth tallest in the world, behind only the Burj Khalifa, Shanghai Tower and Makkah Royal Clock Tower.

Designed by Kohn Pedersen Fox Associates (KPF), the Ping An Finance Center is located in the heart of Shenzhen’s Fuitan District. The building contains over 100 floors of office space located above a large public podium, with a multi-story atrium providing retail, restaurants and transit options to the city and greater Pearl River delta region.

The CTBUH describe the form of the tower as a “taught steel cable, outstretched by the sky and the ground at once. At the top of the tower, the façade tapers to form a pyramid, giving the tower a prismatic aesthetic.” The form is further emphasized by eight composite “megacolumns” along the building envelope that streamline the building for improved structural and wind performance, reducing baseline wind loads by 35 percent.

The facade of the building is one the project most innovative features; its use of 1,700 tons of 316L stainless steel make the envelope the largest stainless steel facade system in the world. The specific material was chosen for its corrosion-resistance, which will allow the building to maintain its appearance for decades even in the city’s salty coastal atmosphere.

In its annual report, the 2016 Tall Building Year in Review, the Council on Tall Buildings and Urban Habitat (CTBUH) has announced that 2016 saw the completion of a record 128 buildings 200 meters or higher. This number surpasses the previous record of 114 completions set in 2015. 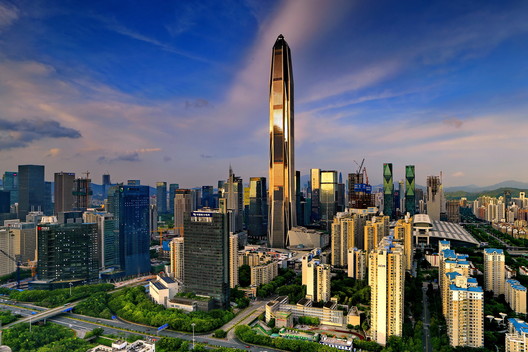