The acquisition will be removed from its current site and moved to become part of the V&A collection, where it will join several other large fragments of architectural history, including the 17th-century timber facade of Sir Paul Pindar's House in Bishopsgate, London, and the gilded Music Room salvaged from Norfolk House in St. James's Square, London.

“This three-storey section of Robin Hood Gardens, complete with 'street in the sky', is an important piece of Brutalism, worth preserving for future generations,” said Dr Christopher Turner, Keeper of the V&A's Design, Architecture and Digital Department. ”It is also an object that will stimulate debate around architecture and urbanism today – it raises important questions about the history and future of housing in Britain, and what we want from our cities.

“When demolition of their social housing project was imminent, Liza Fior (Partner of muf architecture/art), who was at the end of her year-long residency at the V&A, proposed that the Museum should collect a fragment of the building and worked with us to help secure it,” added Dr Neil Bingham, Curator of Contemporary Architectural Collections. “The V&A's acquisition of a section of Robin Hood Gardens, complete with front and back facades, will motivate new thinking and research into this highly experimental period of British architectural and urban history.

Referred to by the V&A as a “defining example of Brutalist architecture and social housing,” Robin Hood Gardens is being razed to make way for a new community of more than 1,500 apartments and public spaces designed by Haworth Tompkins, Metropolitan Workshop and CF Møller. See more coverage of Robin Hood Gardens, here.

Demolition has officially commenced on East London housing development Robin Hood Gardens, bringing to an end any chance of a last-minute preservation effort for the Brutalist icon. 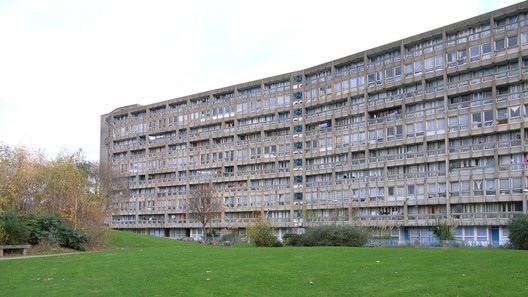