An example of the duo’s “Streets in the Sky” concept, the Robin Hood Gardens featured wide concrete balconies on every third level of each building, providing views into the central garden and create communal space for residents to gather and for children to play. A lack of upkeep, however, caused the complex to fall into disrepair and become an incubator for crime.

Once demolition is complete, developer Swan Housing Association will begin on the next phases of their Blackwall Reach Regeneration Project, which will create more than 1,500 new apartments and public spaces designed by Haworth Tompkins, Metropolitan Workshop and CF Møller. To be constructed over three phases, the scheme will retain only the central grassy mound from the original Robin Hood Gardens.

Apartment units in the new development will be kept “affordable,” although the accuracy of that term as defined by the UK is debatable, as it allows units to be priced up to 80 percent that of the market value. In Blackwall Reach, some apartments will cost as much as $1,855 per month.

British filmmaker Joe Gilbert has created a short tribute film to Alison and Peter Smithson's Robin Hood Gardens estate in Poplar, East London, which-as of August 2015-is set to be demolished. Accompanied by insightful commentary from Timothy Brittain-Catlin, the film charts the buildings' history and recent threats to a backdrop of monochrome shots of the estate, in all of its dilapidated and "pleasantly wild" current state. 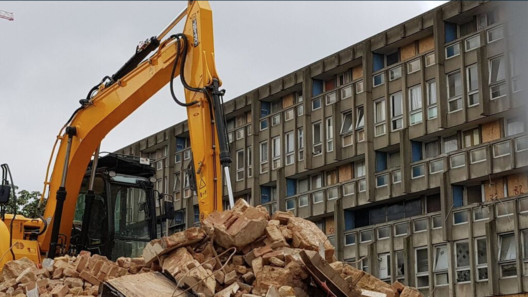