As leaders of Phase 3 of the plan, C.F. Møller will design housing for the eastern portion of the site. A total of 330 one- to five-bedroom residential units, half of which have been designated as affordable, will be located within a courtyard block complex at the edge of an existing garden mound – one of the few elements of the original estate that will be retained. The garden is planned to be replanted and renamed the “Millennium Green.”

Selected from a shortlist of five practices, C. F. Møller was praised by Swan for their focus on “inside out design” that places priority of the building’s residents.

“We were very impressed by their “inside out approach” to design. C.F. Møller really focused on the people who will live in these new homes and the relationship of the homes to the public realm,” said  Swan’s Executive Director of Regeneration and Development, Geoff Pearce. “They were passionate about ensuring we deliver human scale street scenes and links into the landscape to offset the impact of the busy external environment, which is close to the Blackwall Tunnel.”

“As a regeneration team, we felt strongly the C. F. Møller team would bring a fresh and positive approach to the next phase of Blackwall Reach and we are delighted to be able to continue and further develop the positive working relationship which has proved so productive in relation to their work for us on our regeneration of Laindon Shopping Centre”.

C.F. Møller will continue to develop the early schemes shown in renderings released with the news, working with development partners and the community to create an inclusive design.

“Our approach to this challenging project is to develop an architectural and placemaking response with the focus on designing the best possible new homes within a challenging location,” said Rolf Nielsen, Associate Partner at C.F. Møller.

In total, the Blackwall Reach Regeneration Project will create 1,500 apartments and a variety of public spaces including community centers, shops, cafes and a mosque. Phase 1 of the project is already underway with 98 out of 242 homes, the mosque, a community center and an extension to an existing school already constructed. Phase 2 is expected to begin shortly, which will add 242 further homes in four residential buildings designed by Metropolitan Workshop and Haworth Tompkins.

Several notable architects, Richard Rogers, Zaha Hadid, Toyo Ito, Robert Venturi and Simon Smithson (a partner at RSHP and son of Alison and Peter Smithson), had earlier petitioned to save Robin Hood Gardens from demolition, but the building was denied historic listing in 2015.

Built by Alison and Peter Smithson in London, United Kingdom with date 1972. Images by Flickr user : Amanda Vincent-Rous. Robin Hood Gardens is a social housing complex in East London in the residential area of Poplar. It was designed by a... 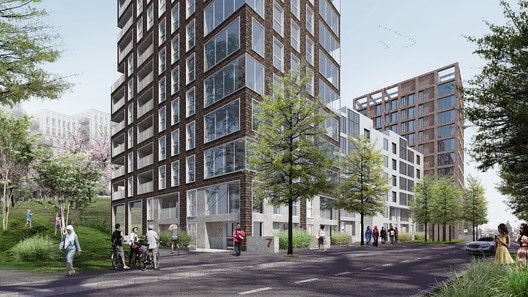