British filmmaker Joe Gilbert has created a short tribute film to Alison and Peter Smithson's Robin Hood Gardens estate in Poplar, East London, which—as of August 2015—is set to be demolished. Accompanied by insightful commentary from Timothy Brittain-Catlin, the film charts the buildings' history and recent threats to a backdrop of monochrome shots of the estate, in all of its dilapidated and "pleasantly wild" current state. The 'Streets in the Sky', made famous by the Smithsons and both widely praised and criticised as a response to the collapse of low-density terrace housing, are one of the focuses of the film.

"[Robin Hood Gardens] is not just a monument and a social record, [...] but also a record to the period in which the local authorities thought very deeply and cared a lot about the nature and quality of public housing for all the people who lived in the borough." —Timothy Brittain-Catlin 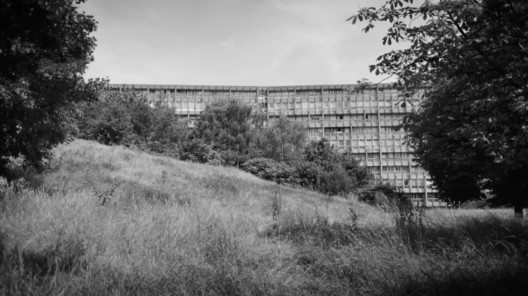