As part of the series of new urban developments sprawling up in Moscow, Zaryadye Park is the latest to open this month in a bid to improve the city’s green space. Commissioned by Moscow Chief Architect, Sergey Kuznetsov, an international consortium led by Diller Scofidio + Renfro in collaboration with Hargreaves Associates and Citymakers has designed this new public space that encourages integration and celebrates the amplitude of regions across Russia by artificially emulating each of their climates: the steppe, the forest, the wetlands and the tundra.

The 35-acre park is located in a historically commercial part of Moscow and is the first of its scale in 50 years. Forming a backdrop to the park, the city’s landmarks such as the Kremlin, Red Square, and St. Basil’s Cathedral develop a cityscape taken advantage of through the many vista points astutely placed into the billowing landscape. The park was officially opened by a civic ceremony during Moscow’s City Day festivities, but full completion is scheduled for Autumn.

A custom paving system pixelates the surface of the park as a combination of green and grey paving stones transform from entirely paved to natural landscape - undefining the edge. By blurring the boundary between landscape and hardscape, free movement throughout the park is promoted for an individualized, unscripted experience. Traditionally, Russia’s parks were extremely ordered and symmetrical so a completely pathless space is important for Moscow’s urban movement.

Across the park, four microclimates are created through regulating the temperatures, eliminating wind and simulating daylight in progressive zones. The augmented climates allow potential use of the park all year round as the open landscape in winter can become hills for sledding whilst pavilions positioned in the folds of the park provide shelter and green spaces.

It is a park for Russia made from Russia…it samples the natures of Russia and merges them with the city, to become a design that could only happen here. It embodies a wild urbanism, a place where architecture and landscape are one - Charles Renfro.

Plunging out over the adjacent road, 70 meters overlook cantilevers over the Moskva River to offer views across the whole city and along the river, instigated by the natural slope of the site. The park also includes five pavilions, two amphitheaters, and a philharmonic concert hall.

Diller Scofidio + Renfro's Zaryadye Park is an exhibition as well as an attraction due to the passive climate control strategies and new building technologies it comprises. Residents of Moscow will be able to appreciate the green spaces as a hub for creativity and cultural integration as the city endeavors to become the ‘leading’ megacity, investing in more large-scale projects.

A Wilderness in the City: How Diller Scofidio + Renfro's Zaryadye Park Could Help Fix Moscow

In late 2013, Diller Scofidio + Renfro won first prize in the international competition to design Zaryadye Park, Moscow's first new park in 50 years. The project is a headliner in a series of high-profile schemes that aim to improve the city's green space, including the renovation of Gorky Park and the recently revealed plans for the Moscow River.

When it comes to urbanism these days, people's attention is increasingly turning to Moscow. The city clearly intends to become one of the world's leading megacities in the near future and is employing all necessary means to achieve its goal, with the city government showing itself to be very willing to invest in important urban developments (though not without some criticism). 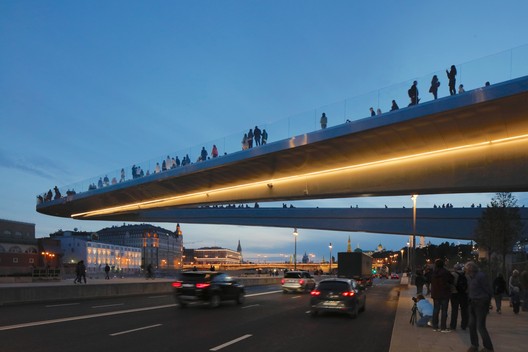