All
Projects
Products
Events
Competitions
Save
All-In-One Structure Solves Flooding, Parking and the Lack of Green Space in Cities
Share
Or
Copy

POP-UP’s varying height changes the city skyline based on the weather. On a dry, sunny day, the car park exists underground with the green space above. On stormy days, overflow sewers lead rainwater below the car park to the water reservoir. As the water reservoir fills up, the parking structure moves up. POP-UP works because of Archimedes’ principle of flotation which states, “buoyancy of a submerged body corresponds to the weight of the displaced fluid.” Hydraulic lifting and steering bearings, along with retaining walls and supplementary guide tracks, secure the structure's movement up and down during water level changes. No matter the water level, the car park stays accessible to pedestrians and cars alike.

While POP-UP is more expensive than a traditional parking garage and water reservoir, it combines three urban elements into one which frees up building plots for residential or commercial spaces. Plus, building just one structure instead of all three would save on construction costs.

Even though POP-UP was designed for Copenhagen and St. John’s Park in New York, THIRD NATURE, in partnership with engineering companies COWI and RAMBOLL, participated in New York based workshops to create innovative climate solutions that are adaptable across all cities and borders.

Arguably as important as the project itself, POP-UP provides design-integrated climate adaptation strategy development. The design team asserts that better, more beautiful urban spaces can be achieved by investing in projects, like POP-UP, that coalesces design and sustainability. 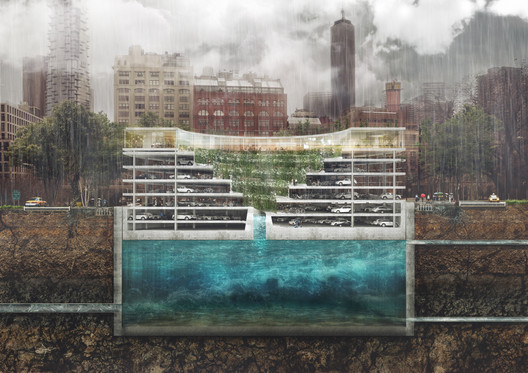